Tigers and Fox Sports Detroit Ram Pick the Stick Winner! What was the prize?

After being whiny about the Tigers a few posts ago, they decided (or Fox Sports Detroit did) to choose me for their Ram Pick the Stick contest. This is a twitter contest they run every game in which the commentators all pick someone they feel will be the player of the game via fantasy points. Twitter users then tweet a hashtag of who they agree with. I was chosen as a winner. I don't know who I picked or what game even. I know after a while I got tired of being wrong and started chasing the points by hash-tagging the points leader for the season game after game.

Leaving Thursday for NSCC. Don't know what I will post about it but thinking of shooting some video from a first timer's prospective. Stay tuned to the blog or subscribe to my youtube via the video link about if you want a peek.

NSCC "The National" Prep - Who's going? Can I borrow some money?

I am hitting my first national show in about a week. My brother and I are coming getting into town Thursday evening, staying down the road and hitting the show all day Friday and Saturday, and coming home after. Is it normal to feel like I will have the least amount of spending money in my pocket? I think I am just the type of person that feels unprepared and under-gunned in this type of situation. I can dig a local card show for 3 hours and spend $5 and I have more than that at least. Are any other bloggers going?

Can I borrow some money? Lol. If anybody who isn't scraping up nickels to go to the show is taking advantage of all the panic-priced cards right now; let me know players/teams you are interested in and I can show you what I have. Paypal preferred. Also, don't give me a shopping list. Dennis is the only one I will accept that from. Trust me, if I treat this show like the others I will end up buying 90% trade bait and a handful of cards for myself.

If anyone is familiar with the Rosemont area and knows the of some cheap parking hit me up. Our hotel wants $32 a night to park. That is a lot of cards. I am thinking the bus station might be better as it is cheaper and between the show and our hotel. If anybody has a better idea PLEASE let me know.

Despite trying to squeeze every penny for gas, food, lodging, and entertainment for my trip to the National, I have had some decent cards show up lately. 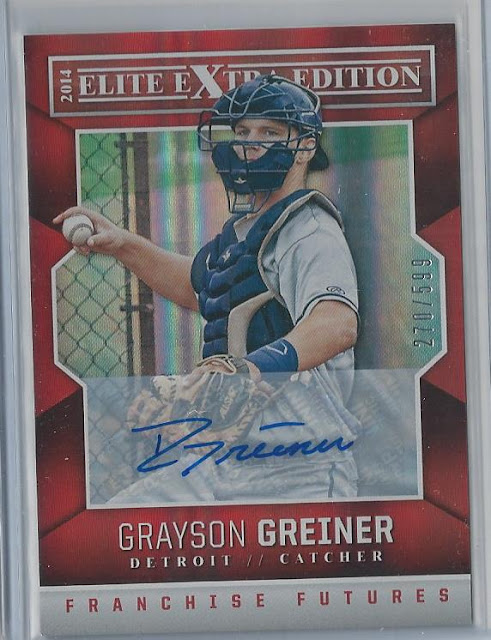 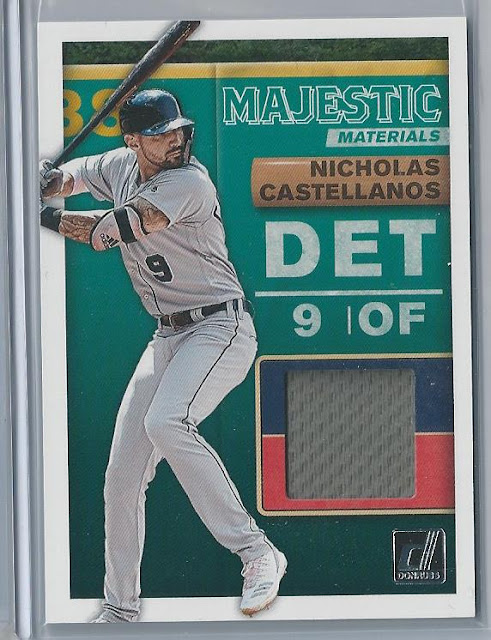 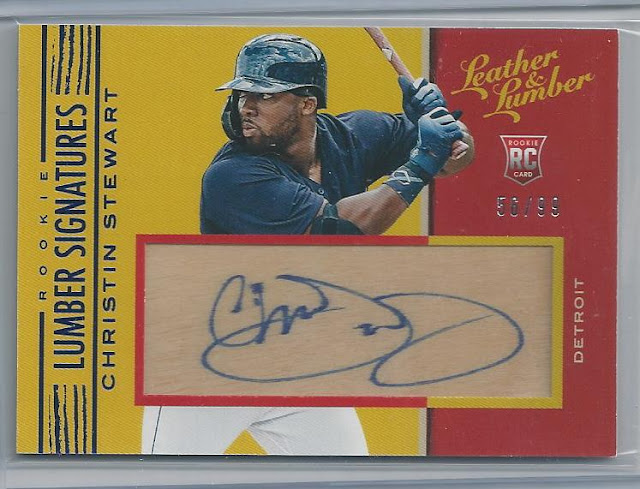 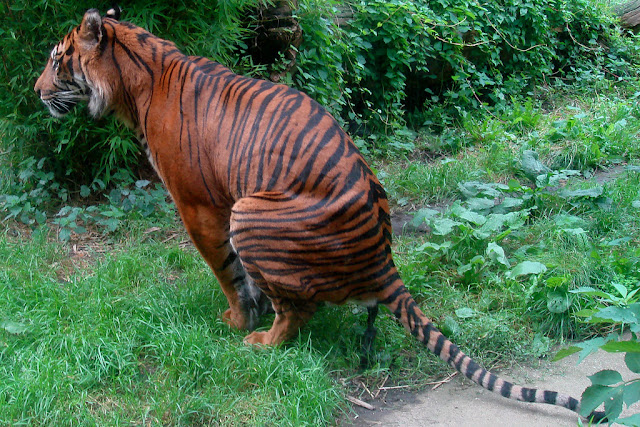 Beware: Honest and colorful language in this post. I am not typically an internet slammer spewing negativity too often but my last Tiger game in Detroit was stupid. Feel free to skip this post and wait for my next as it is just a whiny, bitchy review.

I posted about going to a game with Dennis from Too Many Verlanders a while ago. If he hadn't been with me that day to laugh at the audacious bullshit I might have been physically thrown from the stadium out of frustration. It will be my last game at Comerica Park, forever. I am still a Tiger fan but have no reason to throw money away just to have a shitty time at the ballpark.

My experience that day was not ideal to say the least. I showed up to the game at 2pm to be in line for the Miguel Cabrera bobblehead picture frame giveaway. When your ball club loses 100 games a season it is the little things that matter and giveaway days at Comerica can be crazy. As soon as I stepped into line it began down pouring. I was soaked! Nobody's fault really but then they opened the gates late. When I finally got to the front of the line security opened my very small pull string bag I always bring to games and unwrapped my camera I always bring to games and said it was too big. I had to leave and could not enter. I had just waited 2 hours in a monsoon and have brought this camera to HUNDREDS of games at this stadium and a handful of others and never once had a problem. I threw a fit and reluctantly was escorted away from the stadium. Taking pictures is the only reason I attend games. Especially now that the whole viewing area on the lower level has a net blocking a clear view. But, now they have a strict 80mm zoom limit on cameras. So I have no reason to go back to another game. I can list a million benefits to watching the game at home on TV anyway. So, fuck off Comerica Park. I won't be wasting my money anymore.

I had already fought with the Tigers earlier in the week leading up to the game as my father-in-law bought the tickets for me for my birthday in March but never received an email with the actual tickets and did not have the MLB Ball Park app. Customer service said "the tickets show they were never printed and the email was never opened but we cannot resend the email. I can have them at will call for you for $10 a ticket." What the fuck Comerica Park?! How does that work when he purchased their parking pass for $30 on top of the $200 tickets? So much time wasted for no good reason. It was an unbelievable phone conversation that did nothing but piss off myself and my father-in-law.

On game day, I ended up returning my camera to my car and entering the stadium another way. I was able to get the giveaway item but sold it to someone at the game as soon as I could to pay for food while I waited out a 4 hour rain delay. I was told by other fans and multiple Tiger's employees I should have just jumped in another line. Wow. Wonderful. That makes me feel better. Waiting out the rain I watched kids throwing balls to see how fast they threw. Lo and behold a dad pulls out THE SAME DAMN CAMERA I HAVE and starts taking pictures of his kids. I took a pic and blurred his face and tweeted the Tigers that I would not be back. I'm not usually that guy but I was just pissed. Now I see how that guy (angry internet bitcher) is created. After all this BS there is nothing that could rectify the situation anyway so it was a pointless vent. Of course they replied to me that they would have Comerica Park in contact with me which never happened. It wouldn't have made a difference if they had but just another example of the whole company sucking. I know I am one person out of hundreds of thousands that enter the stadium but never thought I would be driven to be the grumpy douchebag who felt deceived and cheated. The Tigers have made me an angry old man well ahead of my time.

I am getting too busy and lazy to make decent posts lately. I think my blogging activity follows the weather and the colder it is outside, the hotter my blogging is. Right now it is in the 90's outside, therefore; I am a ghost on blogger.
I did however, get a huge mail day about a week ago and decided to record myself opening it all. Included in this video and cannot be overstated is one of the best trade packages I have ever received. Dennis from Too Many Verlanders and also the blog-trader's HOF came to a Tiger game with me and brought me some amazing cards. Two of which have me flabbergasted and will very soon find their way into a display in my card cave. I got too excited and started logging some of Dennis's package into Trading Card Database before I even took pictures. My bad, won't happen again. So not in the video are a stack of Nolan Arenado and Nolan Ryan cards from my wantlist.
Our 4:10 first pitch Red Sox v. Tigers game ended up being an all night ordeal as first pitch happened sometime after 8:15pm. I got home after the game around 1am I think, I am sure Dennis got in much later. The Tigers gave 0 information as the day went on and the stadium took on water at a Titanic pace. There must have been 100 times we looked at each other and said "they have to reschedule." It was awesome having all the extra time to talk cards with Dennis and explore the park a little more than usual. I had a pretty crappy time leading up to meeting up with Dennis at this game so I am so glad he was there to hang out with or else I would have lost my mind.

In the video I review my trade with Dennis, a couple TCDB trades, some ebay purchases, and a big 4 Case Hobby Legends 2019 Stadium Club player break package in which I bought the Christin Stewart, Nick Castellanos, Michael Fulmer and Niko Goodrum spots.
The video is a little lengthy and I try to keep it moving . Here is a skip ahead cheat list of what I am opening at different times in the video: