The Zenith, nay, The Pinnacle, nay, The Crescendo of my Autograph Collection! 13 Years in the Making


13 YEARS. Early into the 2006 season the Tigers were looking good, already. I showed up early to a game and to shag fouls and take pictures of the guys taking BP. For one split second Justin Verlander, Magglio Ordonez, and Jim Leyland shared a joke in deep right field and I snapped my then 35mm Nikon camera capturing the moment above. I was smart enough to have an 8X10 printed soon after because I then lost the film. This pic is definitely a 1/1. I took it. Maybe it can be photo copied but not ever printed again. I was lucky enough to see Justin Verlander at Tigerfest in 2007. I had him sign this picture. For the longest time I cherished this trophy as the best Verlander piece in my collection. I took it to every Tigerfest after that and even to some games trying to add some ink to it but was not successful until this past Tigerfest in 2019 when I had Jim Leyland add his scribble. Then, as if god himself called Venezuela to ask Magglio to come to a barely thawed Michigan; a public signing 2 miles from my house popped up. A smiling Maggs stared at the photo after he signed it for a good 45 seconds. I could see it brought some kind of memory into his mind. My photo is complete. My favorite, priceless piece to stay in my collection forever. 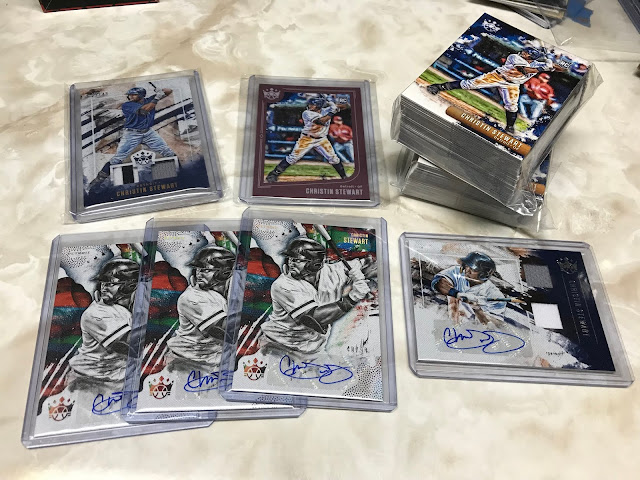 I don't know what got into me but I bought into a very expensive (for me) spot in a Hobby Legends 6 case player break. I snagged the Christin Stewart spot probably in a nostalgic need to feel the days of hitting JaCoby Jones RC's in online breaks. Above is my haul from the break. 108 base rookie cards, dual relic /49, dual relic auto, framed RC, Auto /99, Auto /49 and a base auto. I am pretty happy with this. Of course just as I paid for the break the 1/1 from the set popped up on ebay. Stewart has been impressive. I hope he really blossoms and stays a Tiger. Both rare things nowadays. 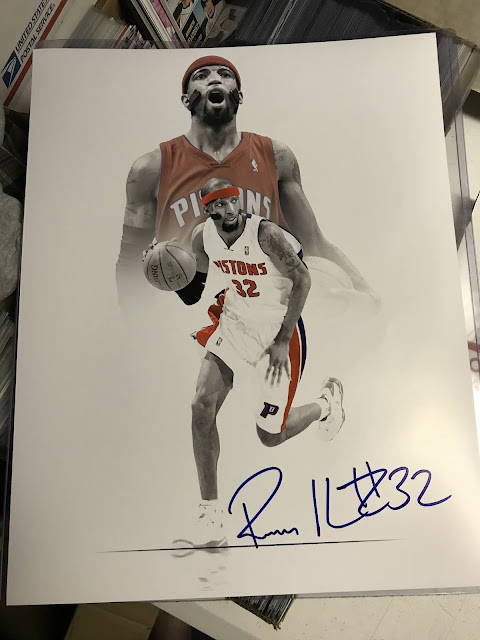 I should have posted this long ago. A few weeks ago I won a free auto at a local Rip Hamilton signing that was put on by the same company that did the Magglio one. I bought this poster from them to get signed.

I made a trade with @B_Litch88 on twitter for the next four cards . 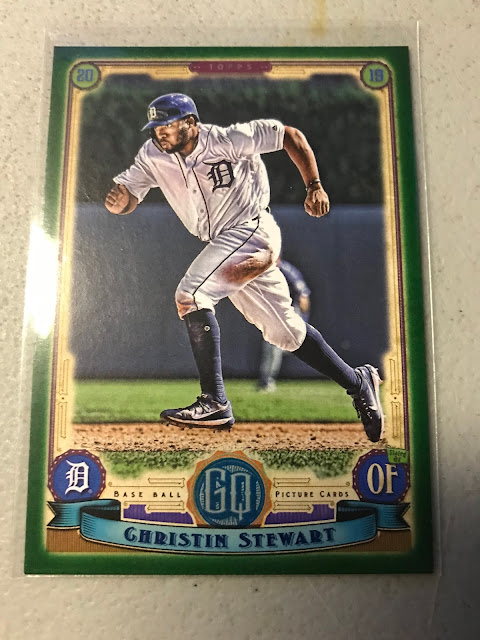 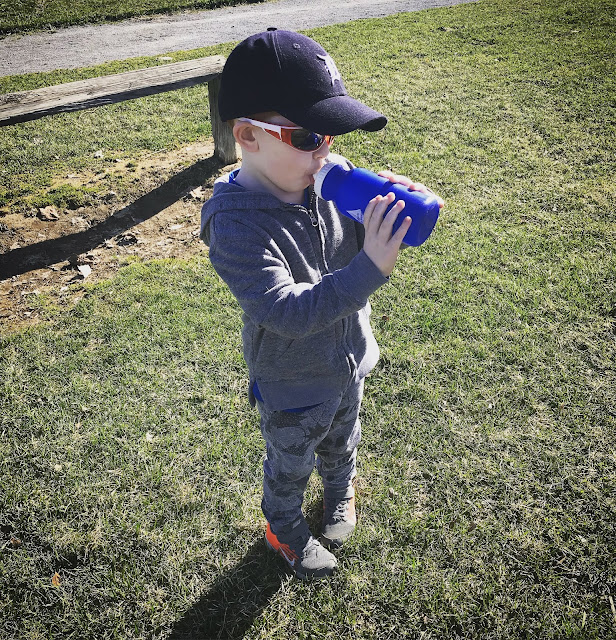 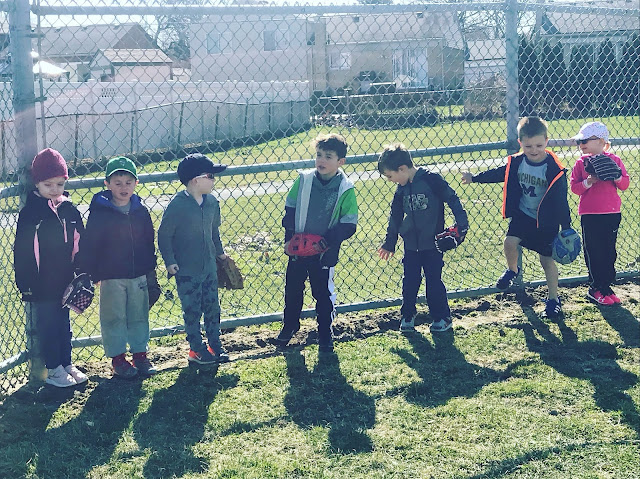 The good news is my son is only 4 but is bigger than half the 5 and 6 year olds on his ball team. The bad news is I am an assistant coach and our team is the Braves.

The woman I gave a free ticket to Tigerfest to gave me 2 tickets to the Tigers v. Royals game. I ended up going solo. It was a new experience being there alone. It was fun. I HATE the screens. Even in batting practice I can no longer get decent, sharp images because of those dumb ass screens. 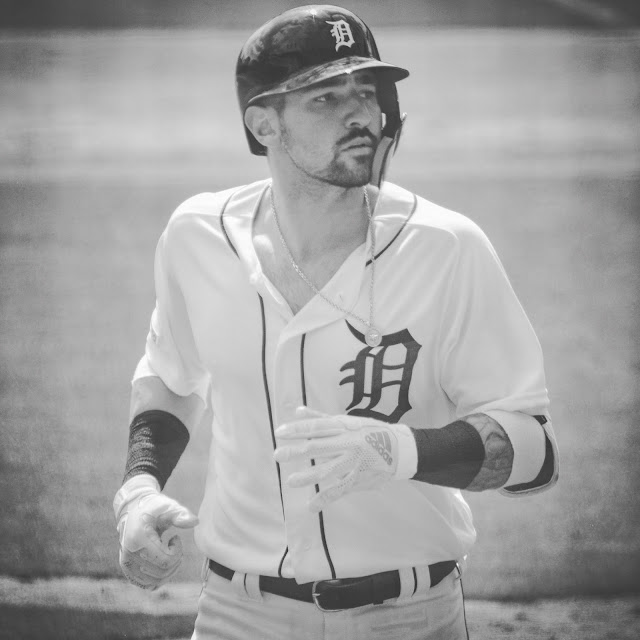 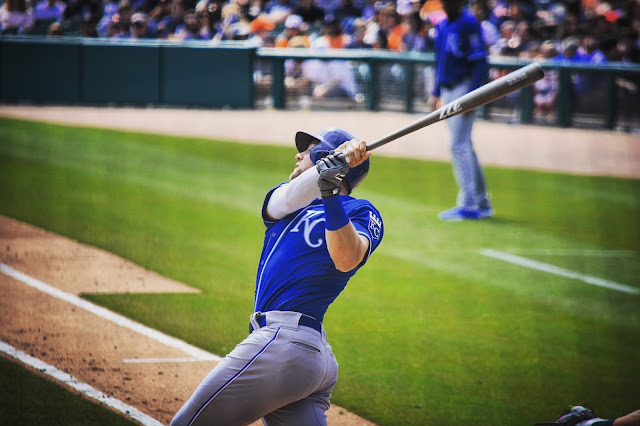 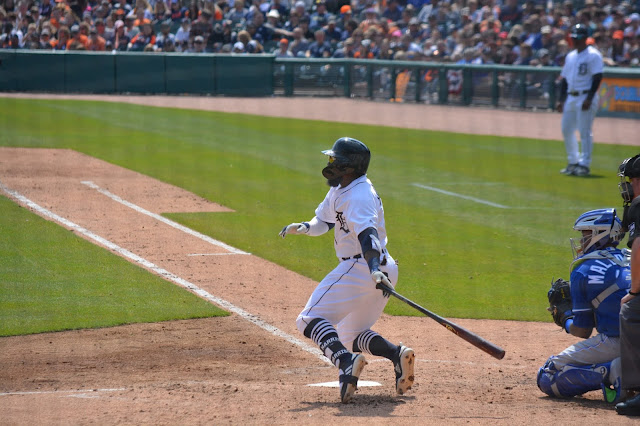 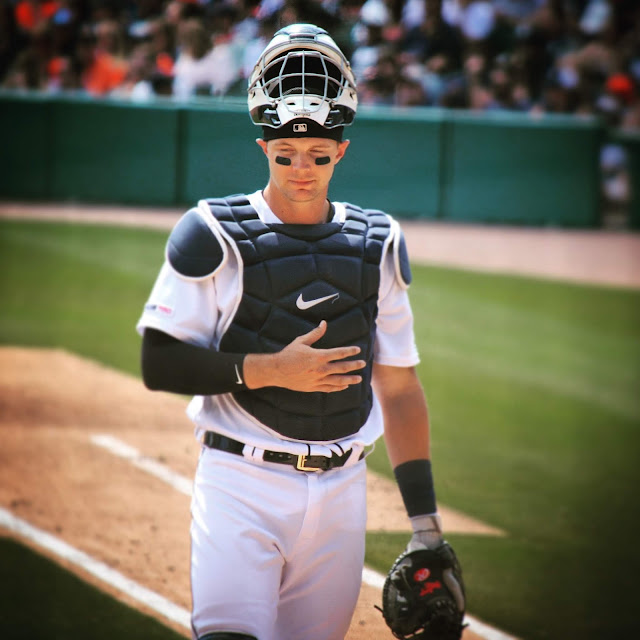 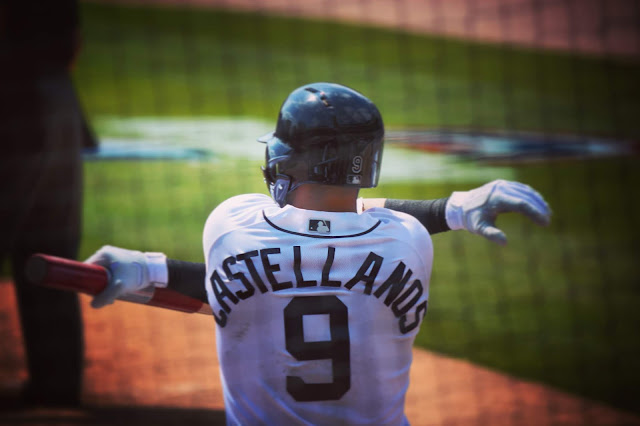 The four cards below I pulled from a table I never spend time at at my local show. It is always just shoe boxes stacked and tossed on a table. Nothing priced or organized. I don't know why I even stopped there but I did and pulled these out, threw them down and said "How much?" The guy grabbed them and said "Rice Hoskins? Never heard of him. $1 for Sisco and Hoskins, $2 for Fielder and Salmon." I literally had a ten in my hand hoping to take all 4 for $10. I guess that table should be my first stop next time. 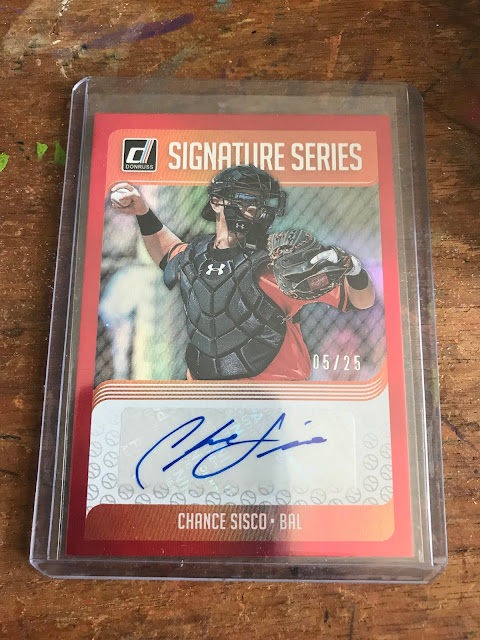 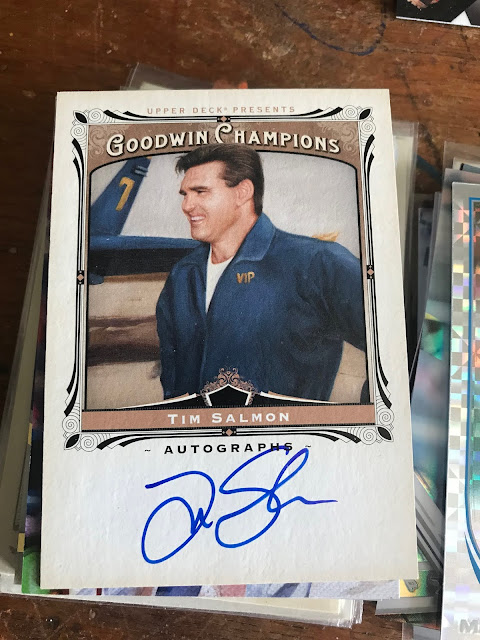 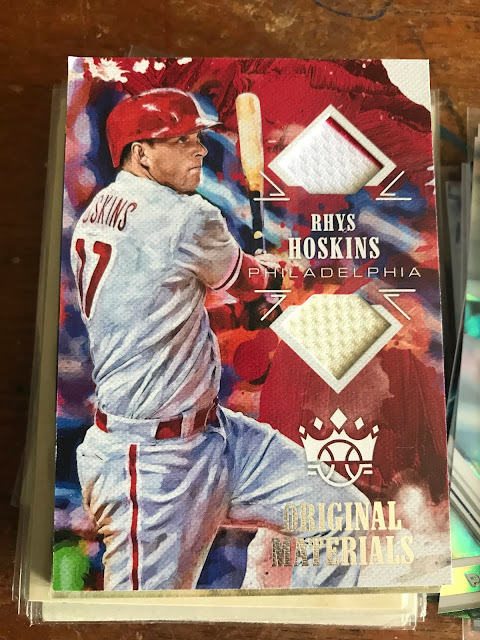 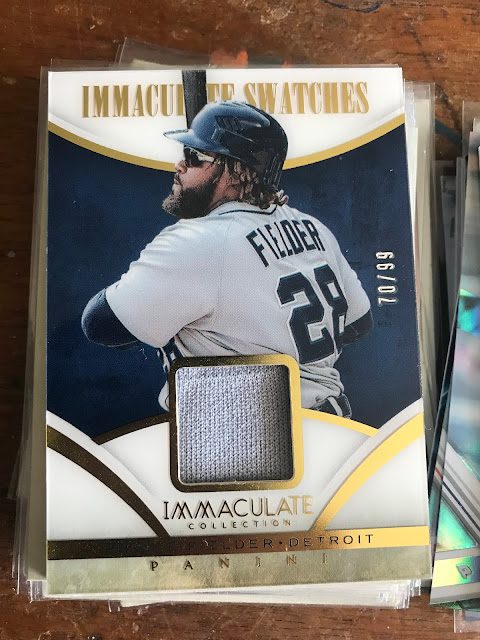 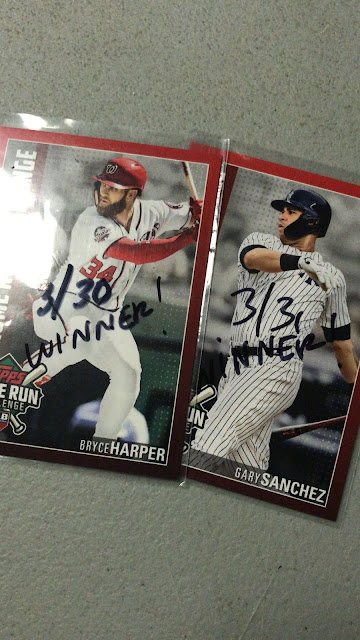 Topps Home Run Challenge is back and I am hitting it HARD. I am sitting 2 for 5 right now with my winners pictured above. I almost got screwed with a Yankee rainout but luckily they played. ALWAYS CHECK THE WEATHER BEFORE PLAYING A CODE! I have 12 more cards to play and more on the way. Please think of me if you have one of these cards and want to swap it for something better OR hit me up if you want my thoughts on when to play your code. I was stupid and thought March would get its own card so I played 5 cards quickly to get them in before April. As soon as I came to my senses I looked and like I suspected; Topps lumps March/April together. So much for low numbered cards. These guys homer every frickin day. 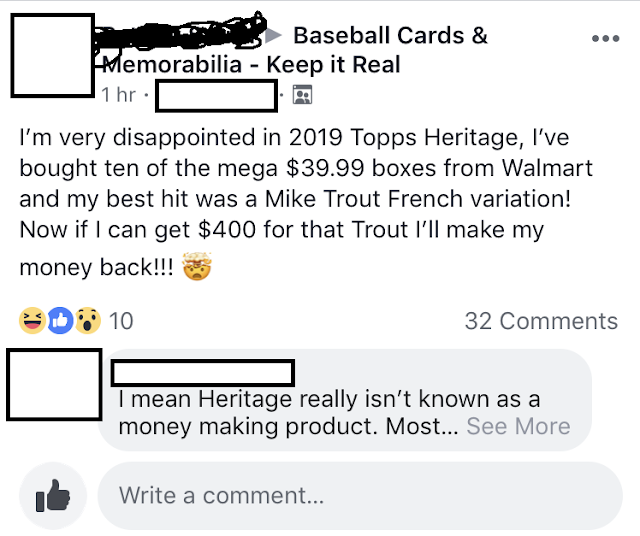 The Judge/Bellinger/Ohtani/Doncic get rich quick rushes from 2017-now are still impacting hobby newbs who expect every pack to hold a hit worth 5X the pack. Ugh, the entitlement. I don't think I see this crap posted from guys who collected through the 80's and 90's, we are just glad to not get doubles in a single pack. I love that he spent $400 on cards from Walmart. 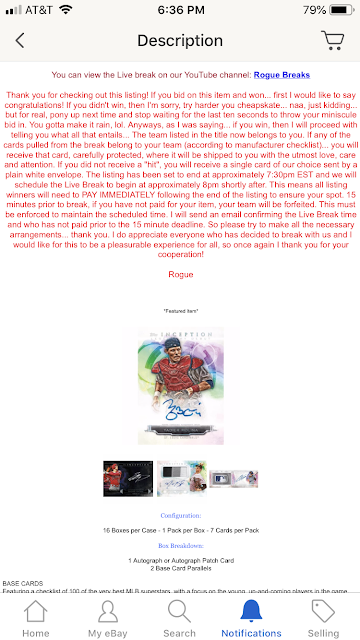 Above is what an ebay breaker puts in all his posts. My word. 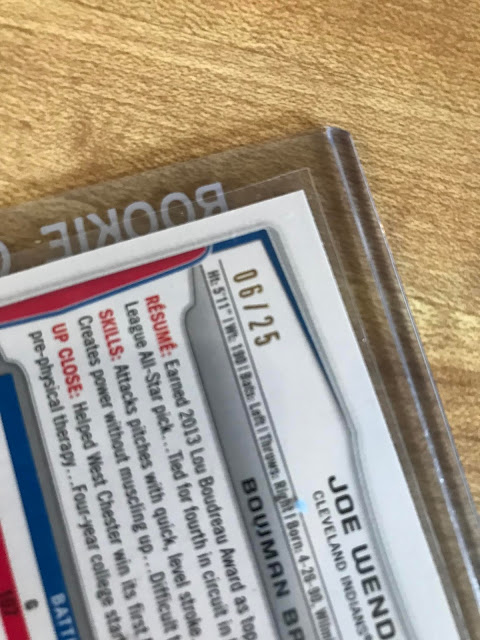 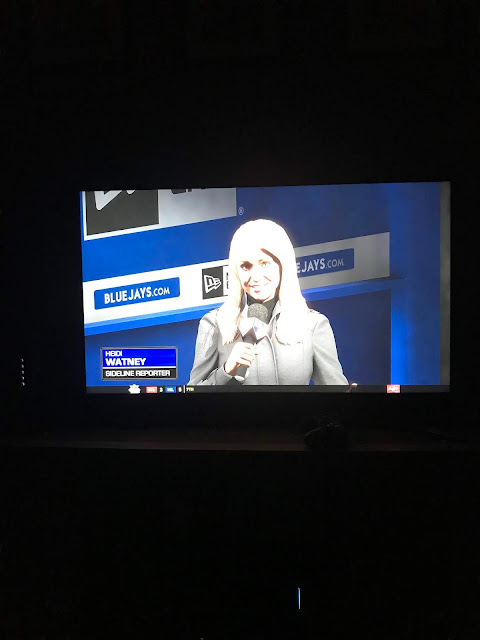 I broke down and bought the show. Its as good as its always been. The addition of Mark DeRosa and Heidi Watney are terrific.
Posted by Scribbled Ink at 5:17 PM 6 comments: