Time to Tear Down Wrigley: 1 Reason The Yankee Fans Want To Win More Than The Cubs Fans

Its the old "fool me once..." saying that keeps biting the Cubs. Can we all agree Wrigley Field is obviously too small. How many fan interfered plays are acceptable? Also, why does it seem like Cubs fans only interfere in ways that hurt their own team?

Here is my reason the Yankees care more about winning than the Cubs:
This happened... 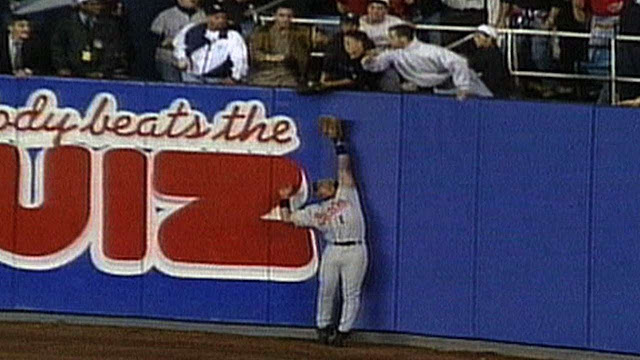 I am sure we all remember Jeffrey Mayer becoming a hero way back when. After this, the Yankees tore down their beloved, history rich stadium and built a new one. Since then, there have been no interferences as big as Mayer's that I can think of in Yankee games. They saw a possible problem and made a change for the sake of winning. Plus, Yankee fans in fact are willing to give 100% on every ball to help their team whenever possible. 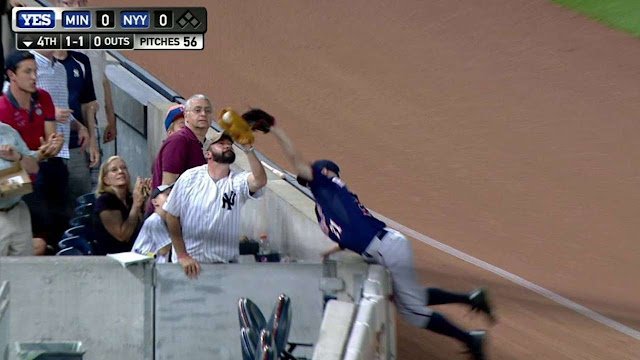 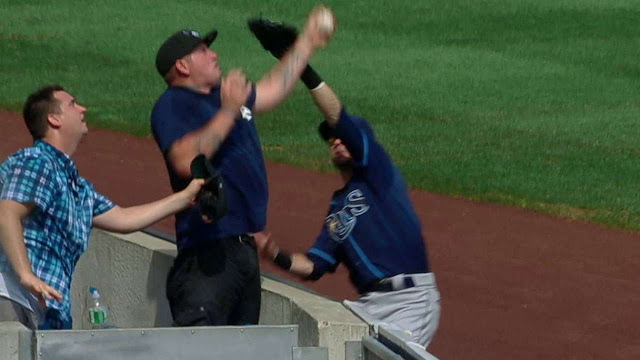 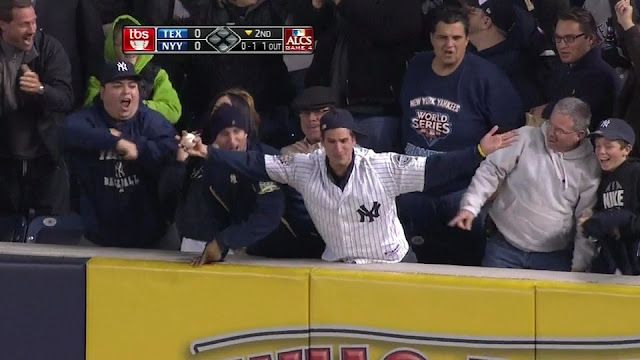 On to the Cubs fans and their selfish ways. How many times does this stuff need to happen before the Cubs get proactive and tear down Wrigley? 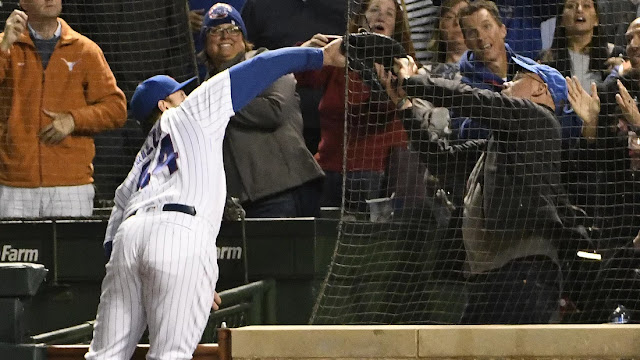 Even the nets won't stop stupid, baseball rule ignorant "fans" from screwing their home team. If the Cubs want any chance to win another World Series they have to build a new stadium. Wrigley should be left standing for the ivy to swallow with a plaque commemorating a stadium and baseball team the fans didn't deserve. There is a Chicago bleacher brawl video going around of fans fighting at a ball game. If this play didn't spark a fight, what the hell did in that game?

By now I hope you are thinking "what an idiot" as you read this stuff. It is all in fun and not actually the way I feel or even realistic. I hope Wrigley stands forever and given the chance I would rather punch a Yankee fan in the stomach over a Cubs one. I just hadn't posted in a while and this was the baseball bouncing around the melon this morning. Thanks for reading if you lasted this long into the post. Go A's!
Posted by Scribbled Ink at 7:14 AM 6 comments:

Last year I was addicted to Panini Chronicles due to the plethora of JaCoby Jones cards in the set. I probably bought into 20 different breaks of different case amounts. I walked away with at least one example of every Jones card in the set. I do hold the most JJ on TCDB currently (my claim to cardboard fame).
This year I haven't bought into any Chronicles breaks because it boasts ONE Detroit Tiger card in the entire set. Topps leads by example shunning Tigers players in sets and apparently Panini is following. Anyway, I randomly bought a retail blaster out of curiosity and a need for trade bait. I was very pleasantly surprised and wonderfully confused by what I pulled. This year's Chronicles is CHAOS. I have not pulled more than 3 base cards in any blaster. There is throwbacks to old sets, variations on top of variations and only the most sought after players are featured. All the cards look great and appeal to my style I guess with the framing and bordering they chose in each insert set. If you can even call them insert sets. If someone would have told me about the layout of this set this year I would have thought I'd hate it. But, I love it. Don't ask me why. I apologize for the crappy scans, I need to clean the scanner. Here are some examples of the rookies I've pulled.

All the non-Rookie cards I've pulled are available for trade on TCDB; pjdionne12 on there. Hit me up!
Posted by Scribbled Ink at 6:15 PM 10 comments: 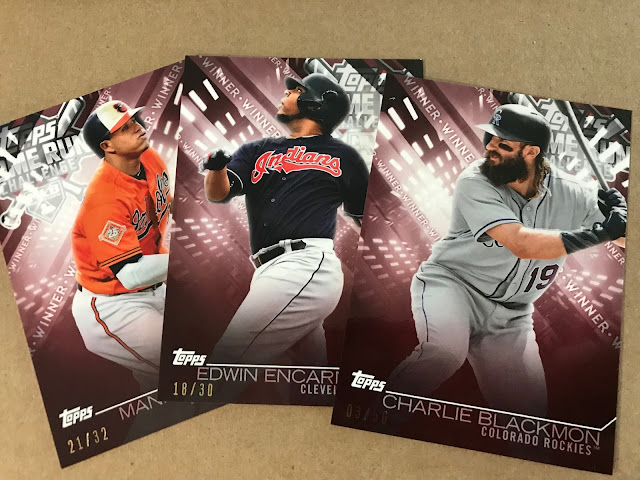 I am getting pretty good at this contest. If you didn't know; Topps has Home Run Challenge cards in most of its 2018 sets. They give you a code and a player, you have to decide what day he hits a homerun. If you are right you get a card numbered to however many winners there are for that player in that month. I am now 4-13 in the contest. Really 4-12 considering I put in Adam Duvall hours before he was traded so he did not play on the day I chose. I am 2-2 with Edwin Encarnacion which is kind of interesting. I have given my brother all the winning cards except the Machado since he decided he didn't have time to do the research to play the game. I told him I would do it and give him the winnings. Somehow I keep winning on his cards and losing on mine. Except Manny... 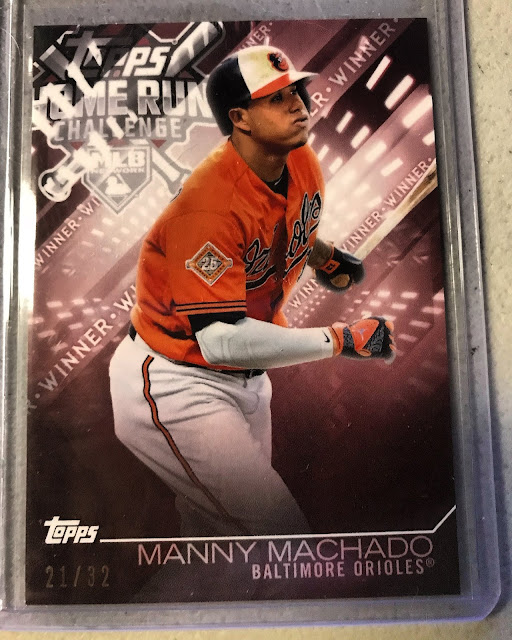 I still have a handful of these left to do. I think its super fun and kind of hope Topps keeps doing it but also want this to be the only year to increase the value of the cards. I have Mike Napoli who I am pretty sure fell of the face of the earth and Gary Sanchez who may not play again this year that will stay unscratched forever probably. I'm picking Jonathan Schoop to homer off of Chris Archer on the 14th. He owns him. Wish me luck. If anybody has any of the unscratched they want to trade me or want me to research and play for them let me know!


Also, here are some recent cards sent to me in trade on TCDB: 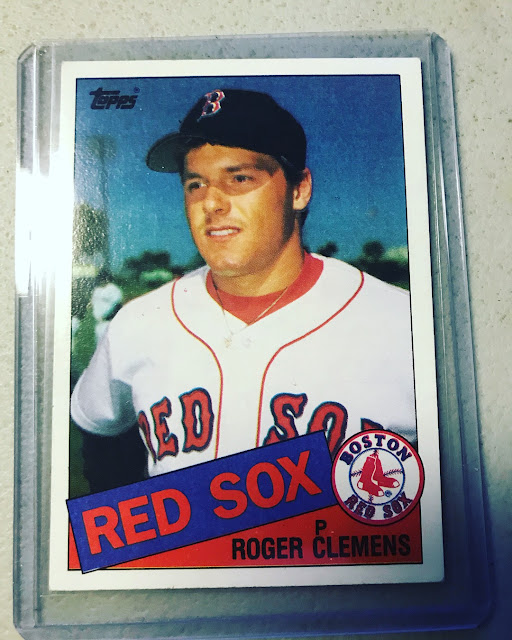 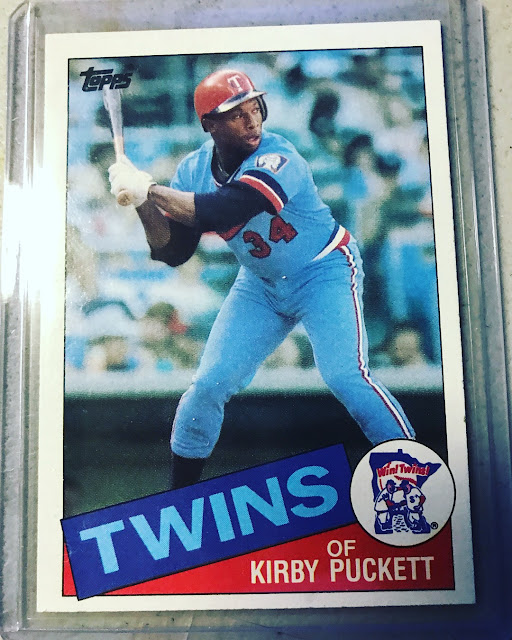 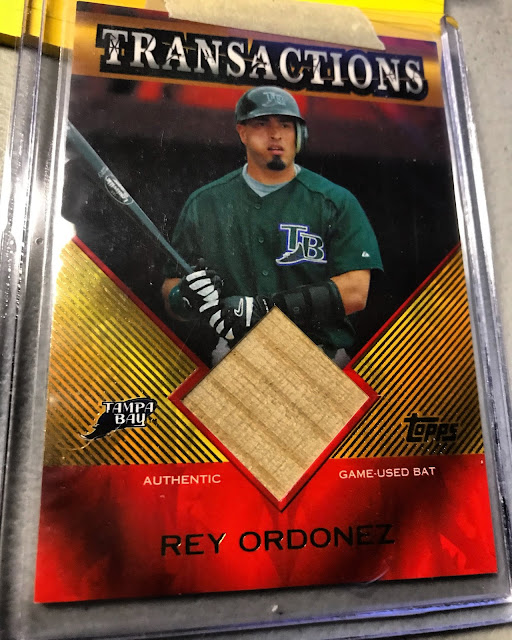 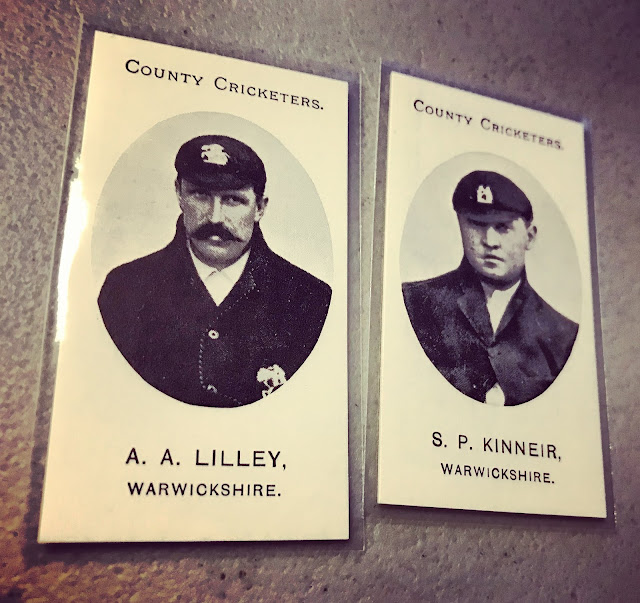 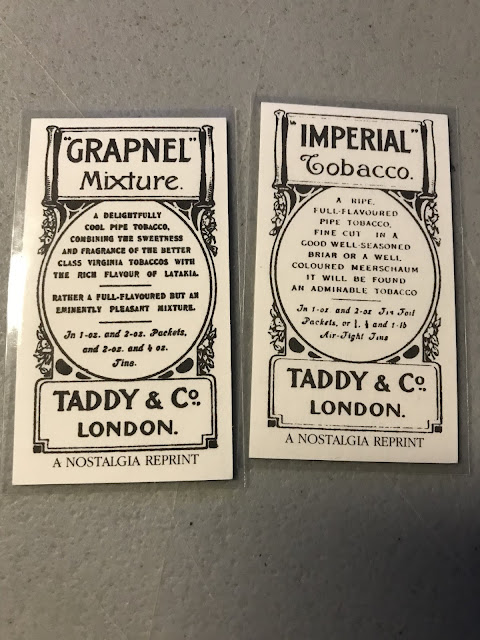 During one of my late night sleepy-stupor ebay visits I decided to diversify my collection a bit. Lately, I have been very curious about the game of Cricket. I would love to try it sometime. Anyway, like most things that exist in this world; the professional sport of cricket has trading cards. These two cards are obvious reprints and I have yet to research anything about them but they are interesting to look at and I can now say I own cricket cards. Classy ones at that.
Posted by Scribbled Ink at 8:45 PM 1 comment:

I have had some really great TTM successes in the past few months. Not pictured are two returns from Clayton Kershaw. Both were sent over a year ago. He sent back a small card explaining his charity and a couple cards. I will have to dig them out. I must have sent at the perfect time because both cards are different so he probably ran out of the first style before he got to my second request. 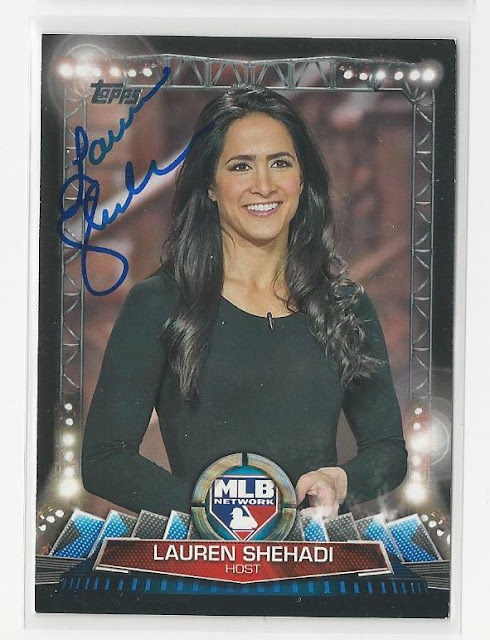 First off is an amazing return and my new all time favorite card in my collection. I am such a fan of Lauren Shehadi for obvious reasons but I also think she seems super cool and makes MLB Central on MLB Network worth watching and the greatest show ever made. Her and DeRo together make an awesome show! It honestly took me 100X longer to find this card via trade then it did to get a scribble from her. Awesome woman and my one and only celebrity crush. 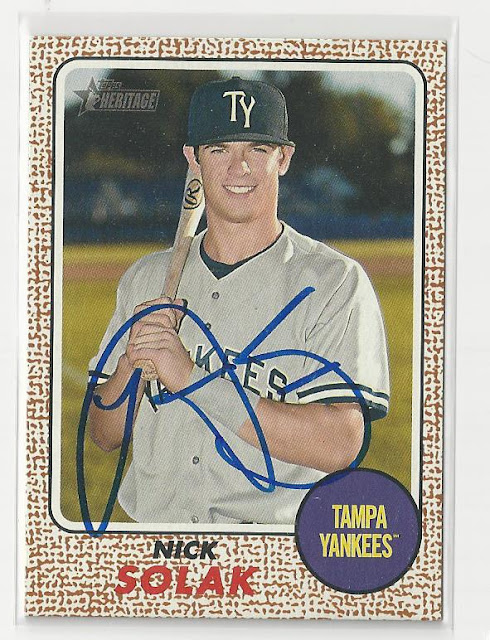 Nick Solak was nice enough to drag his sharpie on a card for me. Funny thing is; since getting this return back I have pulled 2 of his autos from packs. Weird. 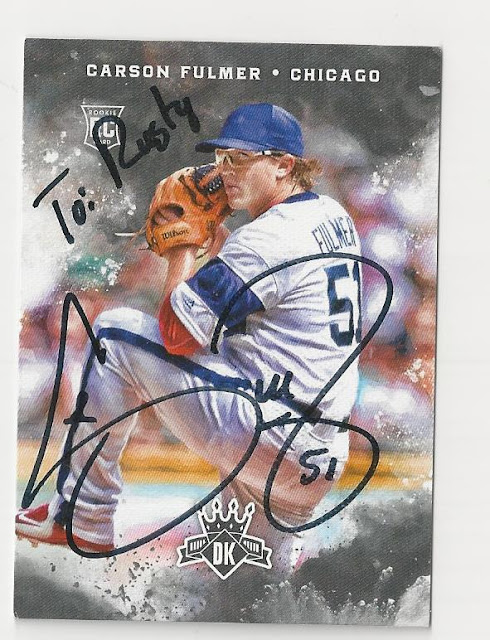 Rusty is my dog. I think I mentioned in a long lost post that my brother and I were sending 5 TTM requests to secret recipients in the other's name. He has received back Kaline and a denial from Adrian Beltre. I received this Carson Fulmer auto that he sent out in my dog's name. I like it anyway. Carson has a great signature and I will always think of my dog when flipping through my TTM binder. 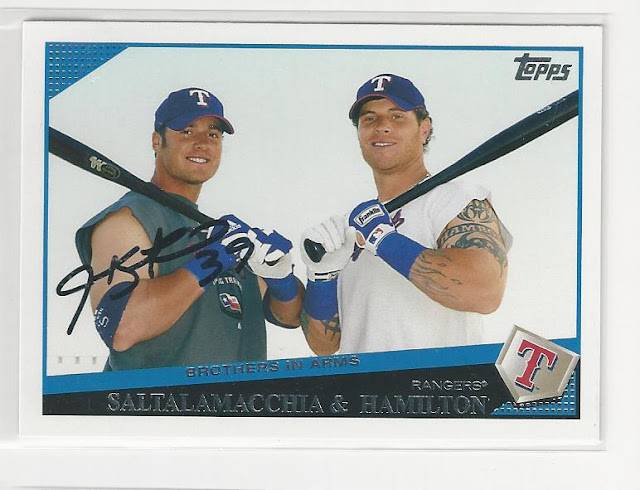 This is actually a denial. I was lucky enough to get Salty to sign this card TTM a while back and then sent it to Josh Hamilton. It got returned unsigned. I am just glad it came back. I am sure Hamilton will be working the card show circuit someday and I can get the other half scribbled on.
Posted by Scribbled Ink at 9:05 PM 2 comments: