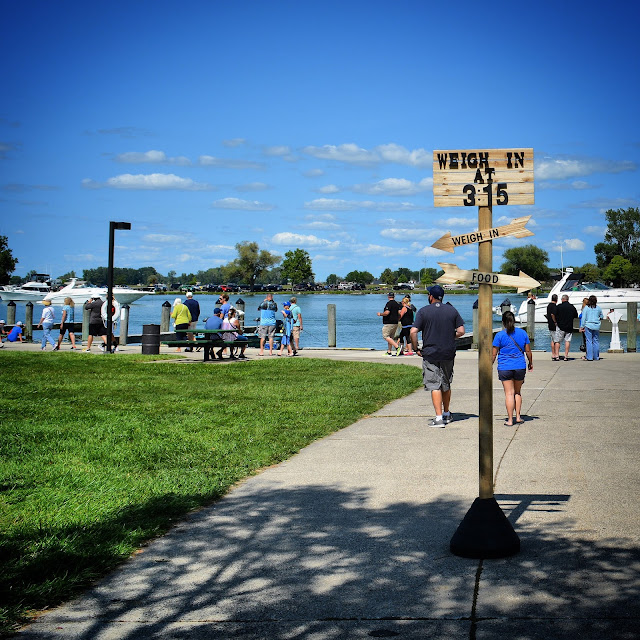 For the few people who read my blog: Even though there was a Tiger brawl, I will warn you this post has little to nothing to do with baseball except that it includes Allen and Ginter cards. BUT, if you give me a chance to enlighten some of you a bit on professional fishing you just may find some similarities with baseball.
I was able to attend my first Bassmaster Elite weigh in this weekend. For those who don't know, Bassmasters = MLB in the fishing world. The Elite series of anglers are major leaguers in their field. I have watched these guys on TV for a long time and many of the anglers have taken a spot in my favorite people file in my head right next to Nolan Ryan and Cecil Fielder. I posted a while back about getting Kevn VanDam's auto at a boat show on an Allen and Ginter card but I have taken that to a whole new level.
Here is how my days played out. For you baseball people; imagine going to a playoff baseball game of your favorite team and having every player walk by you before leaving the field. You yell to your favorite players "Mr. Verlander, do you have time for a quick signature?" and JV smiles and says "for sure" then comes over and signs your card while asking how your day was and making sincere small talk. These fishing guys may not be world-wide celebrities to most people but there are a lot of us that are fishing freaks that nerd out at these events. If you haven't heard of or watched Major League Fishing on CBS, check it out! It is intense. I was able to get an autograph from any angler I wanted by simply asking politely. NOT A SINGLE ONE ignored me or said no. They ALL came over and talked and joked with me while signing even if they had a bad day on the water. Fred Roumbanus fell on his boat in the high waves and came over with broken ribs to sign an auto and talk. I don't know if these guys are trained to be so cool or if the community of pro fishermen is just lead by example but these dudes were the coolest guys I have ever met. I was blown away at their sincerity and friendliness!

I posted a while ago that I was collecting the Allen and Ginter fishing card insert set. I am one card away (#13 sailfish) from having the set complete. I saw some dude on facebook had already beat me to the collection as I am sure many have but he framed the set the way I had imagined it. It looked good but now I don't want to do the same, I want something unique. So when I decided to hit the Bassmaster weigh in I picked up 15 Largemouth and 15 Smallmouth bass cards extra to take them to the event in hopes of getting them signed. Who knew I would run out of cards on the first day?!

In no particular order:


My first venture into the blogosphere was with an outdoor blog. When I was younger my "passions" would change with the season. I had actual "free time" back then. Spring would get me fired up for baseball season, playing softball, watching the Tigers and collecting cards. As summer really heated up and the Tigers lost any chance of anything my attention would swing towards fishing. As that first cool fall breeze came in I would switch over to hunting. When the snow started falling ice fishing would take over and so on. Nowadays I think I have a better grasp on how to divide my attention and keep all my hobbies relevant, though there is never enough time for any of them.
Anyway, my first blog was outdoor themed and took place during a lot of my absence from cards. When my wife and I moved to Maine it became a way for me to tell stories and keep my friends and family up to date on how things were going and what I was up to. Not to mention I began working at Kittery Trading Post which fueled my outdoor passion and gave me opportunities I had never dreamed of. Some of those opportunities happened to be meeting outdoor celebrities I had looked up to or at least followed the careers of. Tom Miranda, Lee and Tiffany Lakosky, Aaron Lewis and so on. Once Nolan was born the whole blog seemed pointless along with most of my hobbies. As he has become a real human person and finds his own interests, I am getting back into my own hobbies. We find ways of sharing them which is the best feeling in the world for a parent.

Posted by Scribbled Ink at 2:00 PM No comments: