I hate to be that guy. I bitch enough on this blog about the state of our hobby but I need to vent about my recent Panini package. I bought a redemption card off of ebay and redeemed it. I was less than enthusiastic about the Panini website and even more confused as to why it took two months to fill an order that I knew they had ready to ship. I had seen other versions of the same card /25 posted places. Meaning they had been made, signed, and ready to be redeemed.
I told myself to chill; Panini is probably a busy company. I see posts all the time about people waiting crazy amounts of time for their redemptions. I guess I just assumed those cards hadn't been printed or they couldn't get the athlete to sign them. I figured as a company they understood the business and did the best they could.
Today, though, they lost my benefit of the doubt. I noticed my redemption status changed from open to closed suddenly about 2 weeks ago. I nervously waited for any other information but none was posted. Under the "View Shipping?" button (the question mark should have been a red flag) there was no information other than it had been sent 10/17.
Surely, a company, nay, a thriving business like Panini would upload a tracking number if not email me one soon. Silly, naive little collector me.
Today I received a beaten-to-hell ripped package in the mail. I repeatedly said "please don't be from Panini" in my head as I turned it over to see the sender...It was. 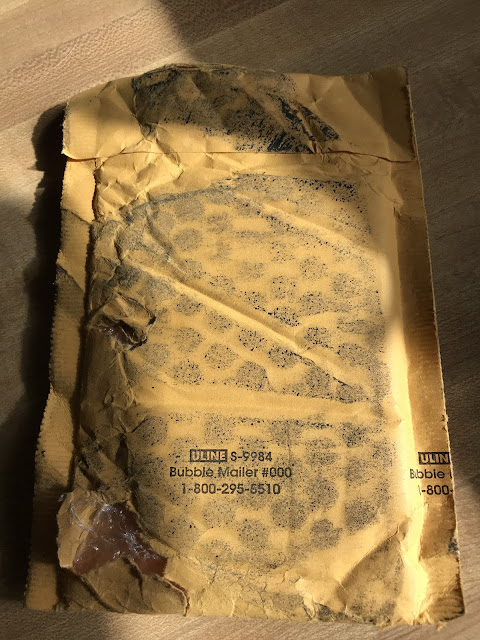 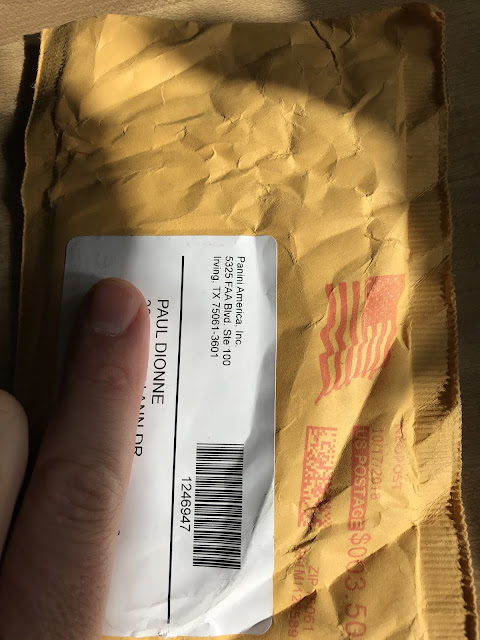 Now, my postal service around here is atrocious. I get rough packages all the time and NEVER receive anything on time. Typically the sender knows how to package well and I rarely have issues. Surely Panini, a freaking card company knows how to ship. They have to, right? This package obviously got stuck and burned for a while in the sorting machine's wheels but the creases and tears are what worried me. Creases = Bends and Tears = Moisture. 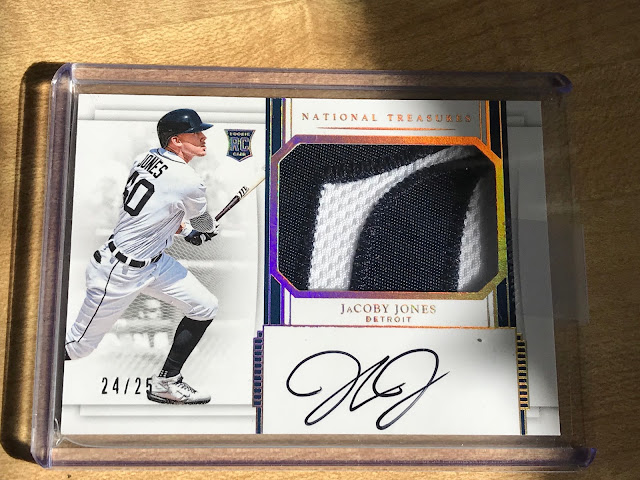 THE CARD WAS OKAY. I should get that out of the way now in case anybody wants to bail on this post thinking "the card was fine pansy, quit whining." BUT... There was no cardboard, no paper, no tissue, no team bag, no protection inside at all. Just my card in a penny sleeve and toploader left to dance around inside a cheap bubble mailer. I know guys who automatically give negative feedback on ebay for this or will stop trading with you.
NEXT...There was no tracking! With all the scumbags taking advantage of the good guys in our hobby right now what is to stop anyone from getting their card and saying it never showed. Would Panini send a replacement? THEY PAID $3.50!!!! The same amount it would have cost to send first class with tracking and give us both piece of mind.
The straw that breaks the breaks the camel's back is the piece of scotch tape on the top of the loader. We all preach painters tape or nothing within the better side of the hobby. How can this be acceptable?! What a joke. I have stood by Panini when others leave them for not having logos and even when they have players put on 4 XXXL sized jerseys for 30 seconds just to make swatches like this one for cards.
I have a real bad taste in my mouth after this one. I'm still in shock.
Posted by Scribbled Ink at 1:38 PM 3 comments:

I am too lazy to track this 5 minute blog post challenge back to it's creator but I will partake in the spoils of having a topic/challenge to post about. I ffffiiiiinnnnnaaaalllllyyyyy have caught up with my white whale. This card has been escaping me since it's release. I saw this one posted for too much money on ebay and snagged it without bothering to even make an offer. It is now mine. Forever. 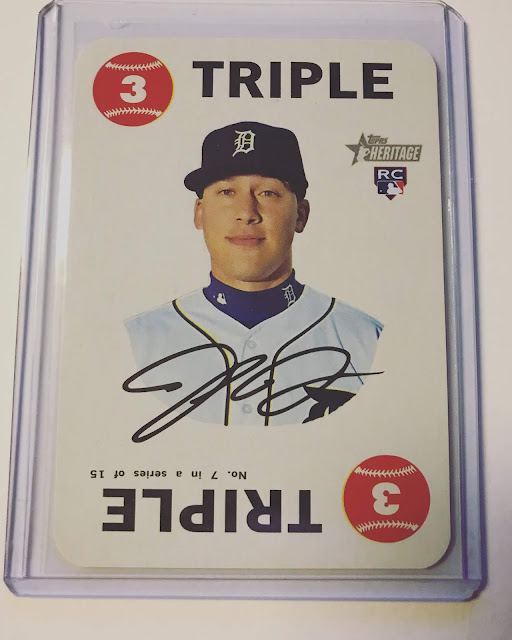 Pretty boring for most of you I am sure. For me, however, I am thrilled to finally have it. I might even try for the rest of the rookie set.

JaCoby Jones is up for the Heart and Hustle award this year. Vote for him HERE. Fan votes account for 5% of the final tally so its almost like the presidential elections. But, its easier and faster than a 5 minute post. Time is up.
Posted by Scribbled Ink at 2:08 PM 2 comments:

Fantasy Baseball; First Loser! Also, a Shout Out to The Lost Collector 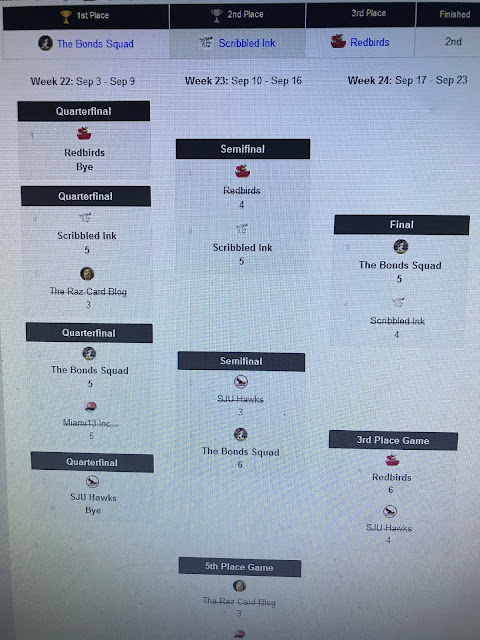 I HATE LOSING. Its ingrained deep within me for whatever reason. It may be an oldest child thing, I don't know. I took second place in fantasy baseball this year and it sucks. I busted my butt making sure I had the best lineup each week but in the final matchup my own Tigers lost it for me. Matt Boyd threw a 2 inning outing and Michael Fulmer is a delicate flower. I guess thats what I get for being a homer and picking up Detroit guys. In my defense; Boyd was good all year but just shit the bed when I needed him most. I lost by ONE category! Matt Boyd is dead to me now. I really enjoyed having this league to work on. I wish it would have been a bit more interactive. I was able to make zero trades even though I offered like 30 throughout the year. There was zero chatter on the league forum. I think more than half of the people signed up ghosted the damn thing after the first month. Typical for fantasy baseball. I hate to say it but I think there is probably a correlation between being able to finish a fantasy baseball season actively and being able to sit and watch a baseball game. Damn millennials and their need for instant gratification and entertainment. Anyway, congratulations to The Bonds Squad whoever you are. It was an amazing championship that came down to the last inning on the last day. A huge thank you and shout out to Jake (I think, I only know the accounts from the league, Twitter @sportcardscollec,  and the blog) from Sports Card Collectors for setting up the league! I am not up on things, it may be a collectively owned blog but always good stuff and peeks at new products.


I had some pretty great trades via Twitter recently. I mistakenly got anxious and worked it all into my collection before taking scans or posting individual contributions. So, sorry to AJ The Lost Collector  or @Lost_Collector. He hooked me up with some sweet Tigers cards. Here are some of the examples that stayed close enough to the surface to grab and snap:

Mike Trout Contest Winner and LOTS of Other Stuff


That Title Should Draw Some Interest, Eh?

I won a contest on Instagram put on by Dre Day Cards account. I am very thankful to win this sweet piece. I do not dabble in much graded stuff for two reasons: 1.) The prices scare me off. Give me a raw RC for $10 over a graded 9.5 for $1200 any day. 2.) Like most collectors now, I started collecting in the 1980's as a kid. Most of my collection that made it to present day looks like I stored them in a rock tumbler. Instead of being mad at my younger self, I denounce grading. Basically because I am poor and once young and naive. So this card is a great addition for me! Please give @dredaycards on instagram a follow plus all the other social media sites.

Cards on Instagram are plentiful as are the scammers. I have done business on Insta but choose very carefully who I deal with and often make potential partners angry. Anytime I see "I don't send first" or any kind of negative sounding crap on people's profiles I avoid that person all together. I have been ripped off on facebook, ebay, and email via this blog and now protect myself a little more. 99.9% of my trades now are on TCDB  as most of you know by now. Here is an example of a "bonus card" someone sent me in a recent trade: 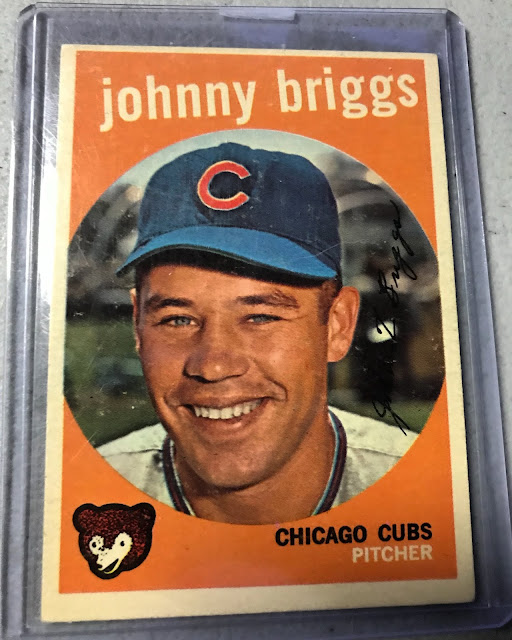 When cards like this are the "bonus card" you know traders are legit on the site and happy doing business with you. Here is another transaction I received: 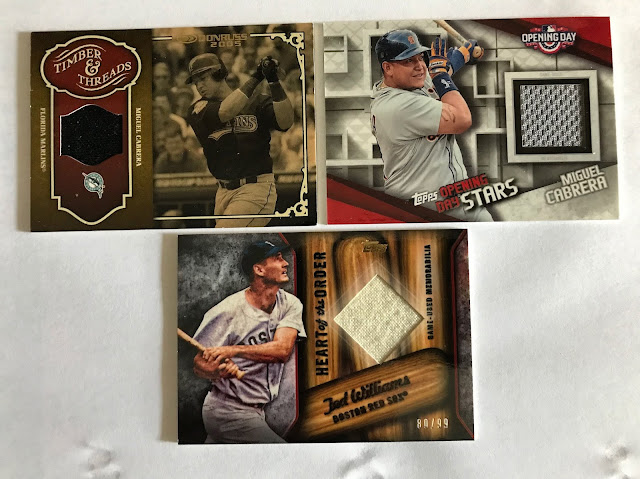 I gave up some big time cards (in my world) for these three, but come on; a Ted Williams relic!!!!!!!

Here is an example of an ebay transaction lately: 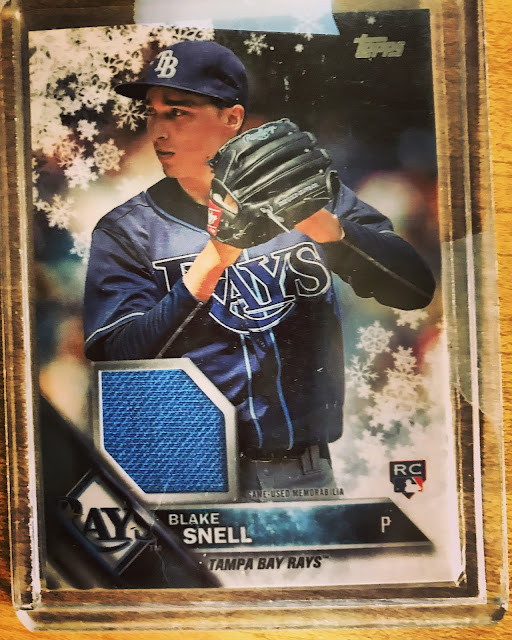 Sweet car, right? WRONG! The card itself would have been sweet except for the animal bite right in the top of it going through the card. The toploader doesn't have matching teeth marks so when the seller blamed USPS I had to laugh. Ebay downright sucks 50% of the time. I was given $1 off this card for the condition not being MINT as in the description. If only there was a card show every other day so I didn't need technology to scratch the itch.
Ebay is really only good to me for one thing: Breaks. It seems like break websites are expensive and I can find the best deals on ebay. Here are some recent break results:


I entered two half case breaks. I do not know if the half cases were from the same origins. I bought Tigers in one and Tigers & Pirates in the other since Pirates went without a bid and I scooped it up for pennies with combined shipping.

Ebay is also good for finding specific cards at buy it now prices when sellers are trustworthy. Finally found a Clearly Authentic Niko I have been waiting for at a reasonable price: 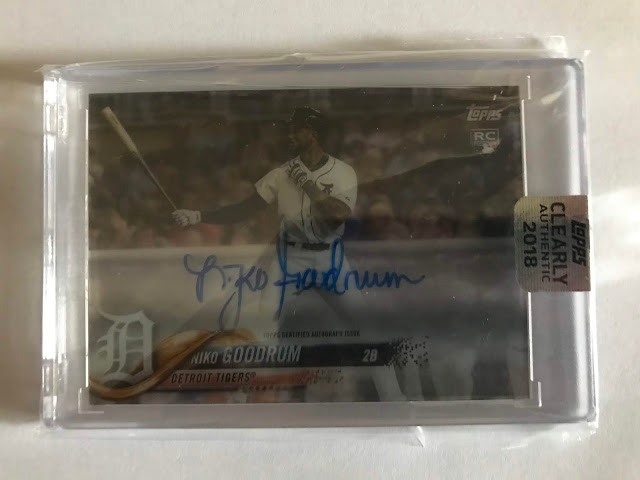 I feel bad for whomever bought this box of Authentic for $40+ and had to sell it to me for $6.


Tigers Wrap Up the Season 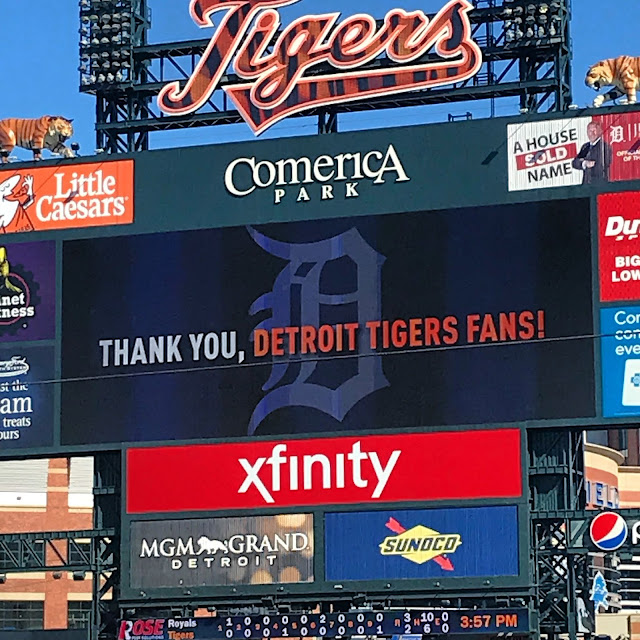 I was very blessed this month. I was able to attend two Tiger games. My wife was offered some suite tickets from another doctor at work and we got to watch Christin Stewart blast his first 2 career home runs while stuffing our faces with all you can eat gourmet food. 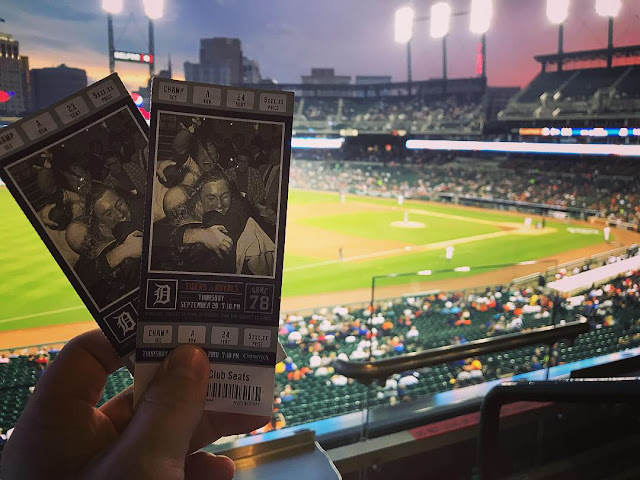 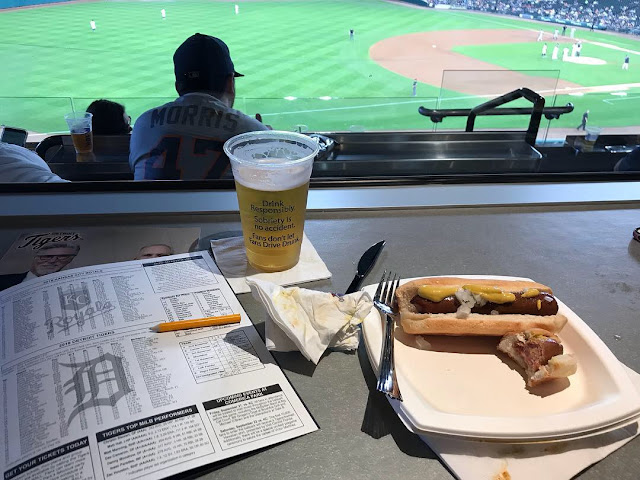 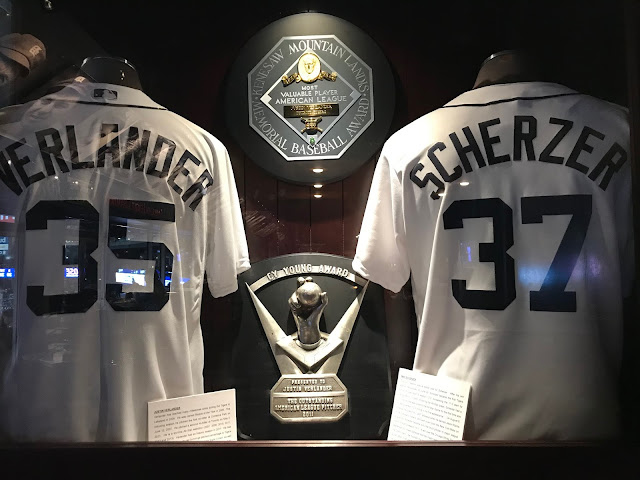 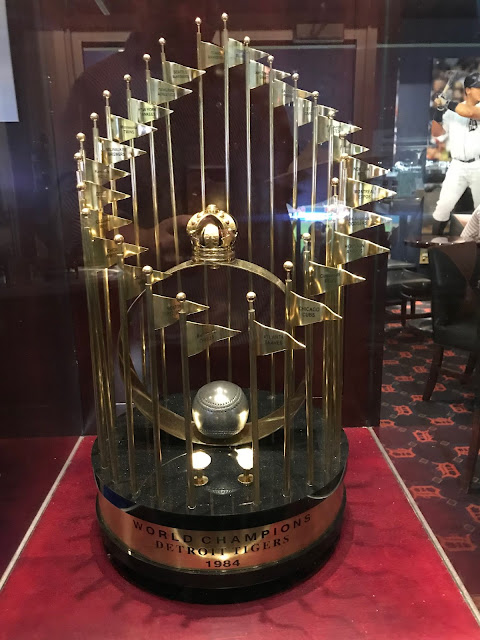 Nolan, my dad and I were able to attend the last home game too, later that week. My brother and his family had tickets to that game and ended up in the next section from us so it was cool to enjoy the last game all together. Noles and me made the first game and last game together. He made it 2 innings on opening day and the whole game this last time. Maybe next year he'll watch some of it! 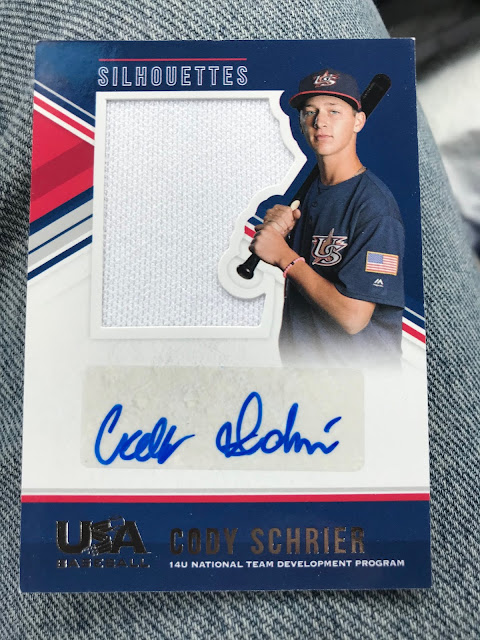 I love Panini's Stars and Stripes blasters for the sheer false excitement it gives you pulling 2-3 autos/relics per box. I say false because much like the card above, an auto from a 14 year old boy is not exactly something to get excited about. I feel like a creep collecting children's autos. Nonetheless, I like pulling ink scribbles and this box at least held a Royce Lewis jumbo relic and my first Casey Mize card.

Collector's Crack is the blog with the very best title picture at the top. Yeah, the one with the custom tobacco cards. That's the one. Go HERE for a sweet World Series prediction contest! My prediction is my dream scenario for the series; Astros/Brewers. Would be a fun series to watch.
Posted by Scribbled Ink at 2:23 PM 5 comments: