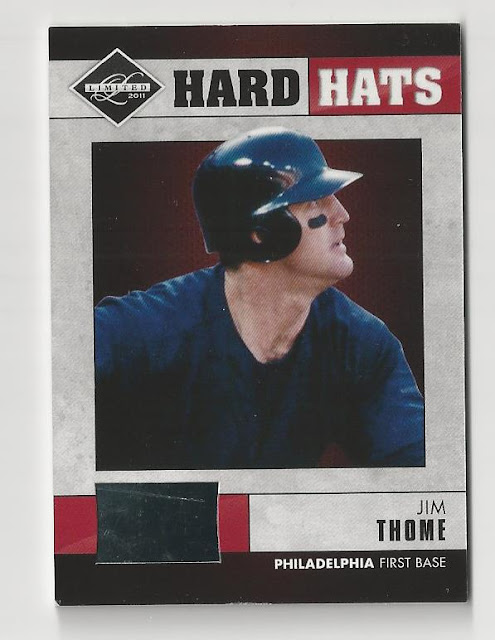 I recently traded with Oscar at Stealing Home who runs the blog http://alltradebait.blogspot.com/ .  I sent him some Dodgers cards and received this Jim Thome Game Used Helmet card and some Thome and Vizquel bonus cards. This is my first helmet card. Oscar is a great trader and exhibits an extra care for where his cards go and who he trades with that I commend him for. I hope to pick up some more trade bait for him soon!
Posted by Scribbled Ink at 1:34 PM 1 comment: 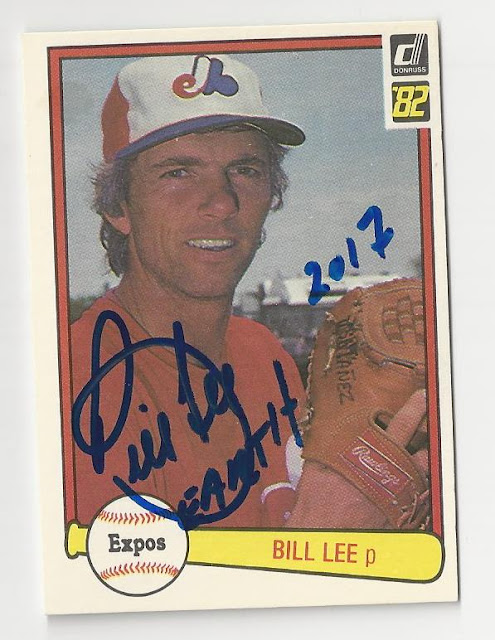 I received a much anticipated TTM return from Bill Lee. If any of you "youths" (said in an ostentatious old man voice) don't know about Bill Lee look him up. There is plenty of videos and interviews that will make him an all time favorite. Awesome Dude.
Posted by Scribbled Ink at 1:31 PM 1 comment: 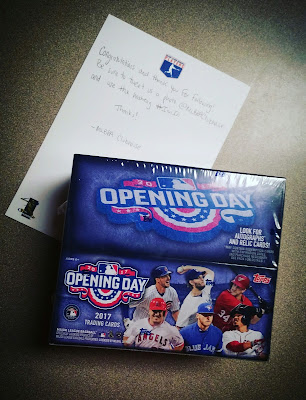 The twitter handle @MLBPAClubhouse puts on a contest every Tuesday called #TotallyDistortedTuesday in which they distort a picture of a baseball card and fans have the chance to guess the player and win prizes. It is a lot of fun especially if you don't cheat and look at other's retweets. I was fortunate enough two weeks ago to win by guessing Stephen Strasburg and promptly received a retail box of 2017 Topps Opening Day. Pretty awesome way to cure the itch of needing to mess with cards as I have no money for cards right now. I didn't get any hits out of the box but I was able to pull all the 2017 Rookies I have been looking for. Opening a full box is always exciting! 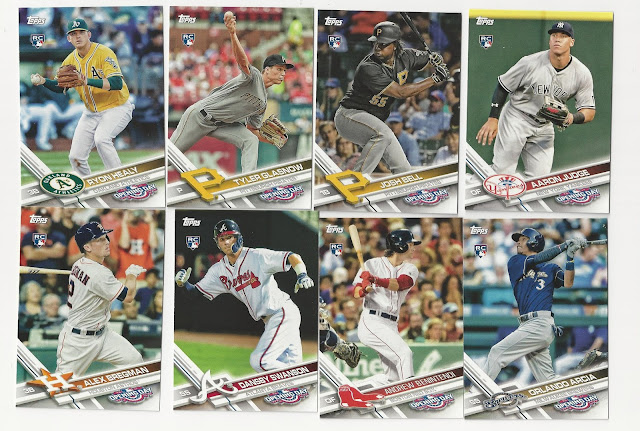 I have been out of town for a while so I have a lot of posts to catch up on including TTM returns and completed trades that I am excited about so stay tuned!
Posted by Scribbled Ink at 12:22 PM No comments: 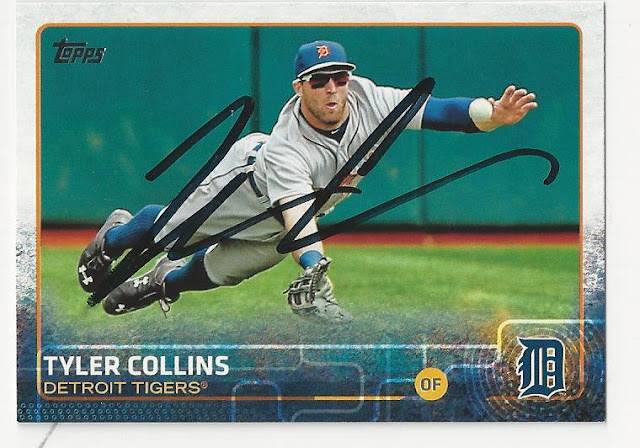 Tyler Collins has come a long way from the call up that gave all the fans the bird a while ago. I love the guy's lefty pop and when he turns on a pitch he can leave the park in a hurry. The auto on this card fits perfectly and looks awesome. I sent to a TON of Tigers players past, present and farm club and its crazy to me I have only had 2 come back so far. Its always strange to me which cards come back signed, which ones come back RTS or not at all and which ones come back like the Yu Darvish I sent out and now Elvis Andrus too: 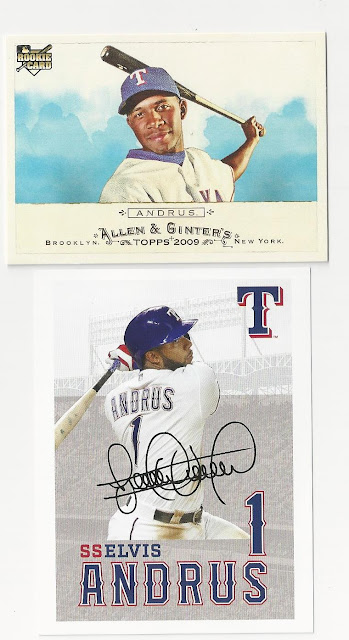 I received another preprinted card from Andrus like I did years ago. This may be a Texas thing, I don't know. I saw somebody on Instagram got one from Lucroy and that makes 3 Rangers that send these out. I sent to Spring Training and have always wanted an Andrus return but will have to continue waiting.

Failure:
I got a RTS from the Brewers spring training for Joba Chamberlain on a card I sent. I know it reached Spring Training while he was there and I had also sent him a very special ball that he handed me years ago that I pray is in his possession and will be returned, signed or not. We'll see I guess. I will always be a huge fan of Joba and really hope this isn't the end of his career.
Posted by Scribbled Ink at 8:30 PM 1 comment: 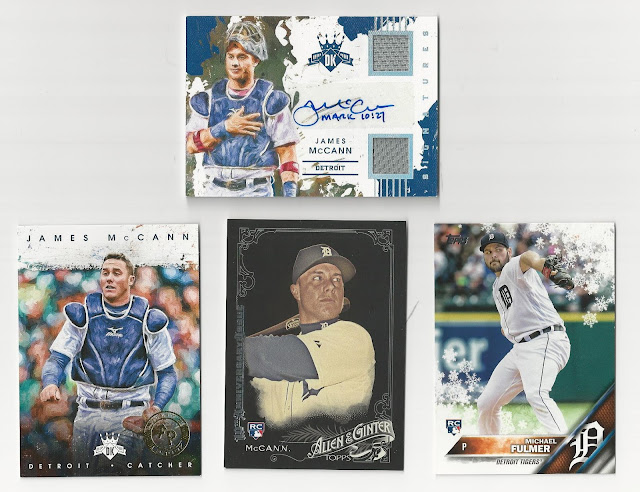 I picked up some beautiful cards on the cheap recently. Can't wait to get the Allen and Ginter X McCann signed in silver to go with my Buck Farmer one. I saw the Tigers have some upcoming public signings in Detroit but the prices seem kind of steep for me. Pudge is pulling $100 a signature! I can pick up a Pudge signed card on Ebay for $20. Jack Morris is $50 a signature, you'll know why that is crazy from a previous post. I may go to the Nick Castellanos and the Michael Fulmer signings as I have 5X7's I want signed. I still need to pick something to get signed at the upcoming JD Martinez one. Meanwhile, the Tigers are hot and aren't even close to firing on all cylinders.
Posted by Scribbled Ink at 3:14 PM 1 comment: 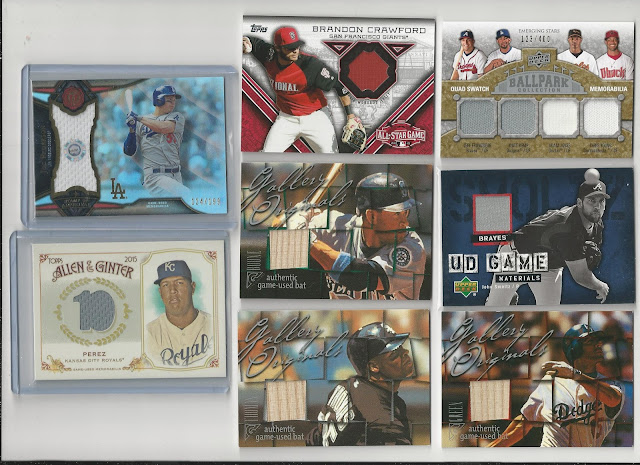 I'm really getting into this online trading thing. I am running low on trade bait so I need to do something to build up some product. I recently completed a trade with The Daily Dimwit a blogger I follow who has a magic touch and pulls amazing cards. Check out his blog for sure. He sent me some great cards and awesome bonuses for some Houston Astros cards. Here are the highlights I am super excited about:


I'm listening to Opening Day right now on the radio. Had tickets but my buddy's daughter is sick. If he doesn't go, I don't go. He's that kind of friend. We'll make it up very soon. Go Tigers!
Posted by Scribbled Ink at 10:31 AM 1 comment: 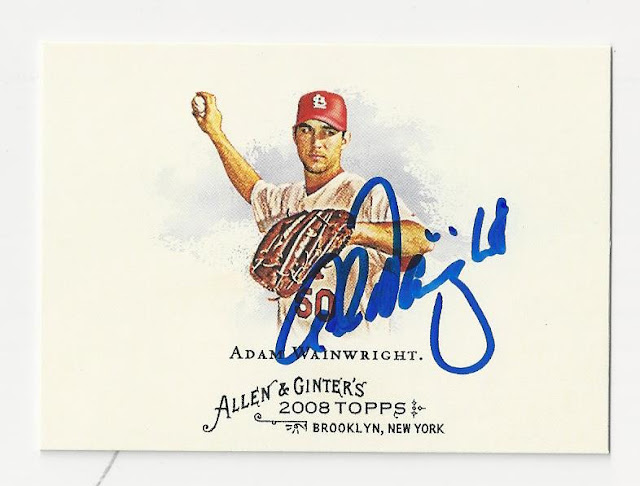 I have been a HUGE Adam Wainwright fan since his stint on Drury Outdoors Dream Season Celebrity. I have to support my fellow outdoorsmen and I implore you to research the good things this guy does off the field. He's the real deal and this is one of my favorite cards of all time now. I may carry it in my bow case this year for some luck.

I also received a pre-printed card from Yu Darvish. I didn't know what to expect from him but appreciate any return thats not a Return To Sender.
Posted by Scribbled Ink at 9:51 PM No comments: 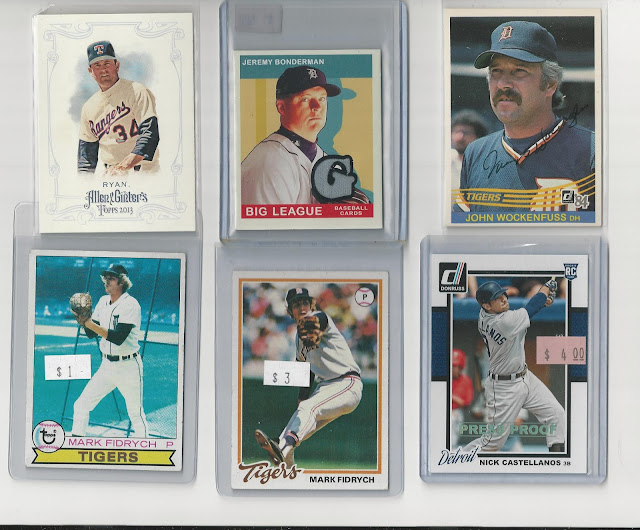 Above is a small sampling of cards I traded for and purchased at the last card show. Below is an interesting Bill Freehan card I guess you would call it. I thought it would fit in nicely with the 5X7's I'm collecting. 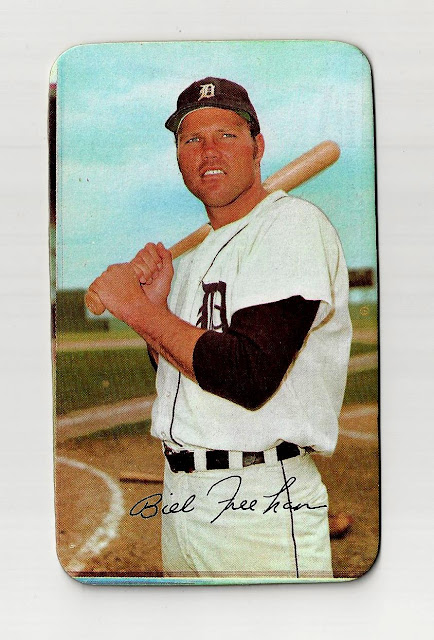 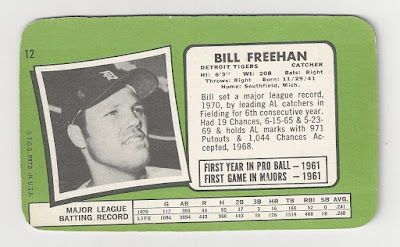 Next, I completed a trade with a gentleman who had bought a number of Pirates cards from me on Ebay. I gave up on Ebay as the fees and difficult customers pissed me off too bad. But this dude named Nathan was a good customer so I offered to send him a package of Pittsburgh stuff if in return he would send me some Tiger stuff. The guy sent me an amazing package that I fear was way better than what I sent him. Now, he received my package first before he sent me one so its probably just my "homer" tiger fan thinking. Anyway, below is a small sample of some of the treasures from what he sent me. 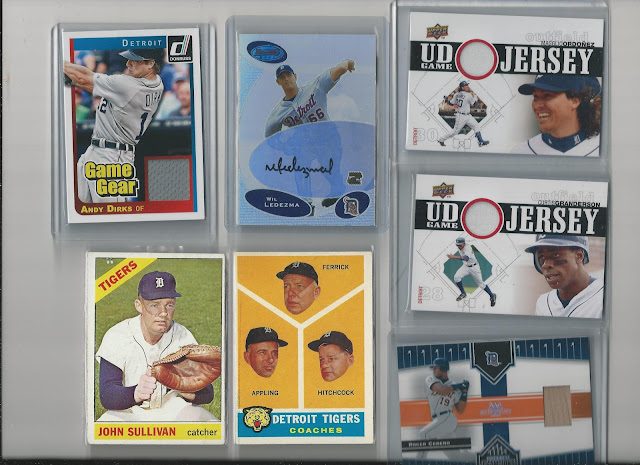 This trade was so much fun I already have another one set up with another guy. This one was 100% mystery as we didn't tell each other what was coming. My next trade is all spelled out but I am sending bonus cards and I am pretty sure he is too. I'll post what I get...
Posted by Scribbled Ink at 9:46 PM No comments: 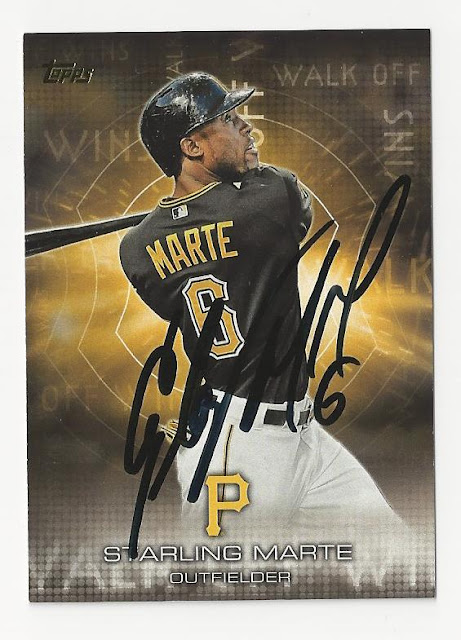 Starling Marte returned an amazing piece of art. This card is gorgeous and Marte is poised to have a breakout season and become a superstar.
Posted by Scribbled Ink at 3:40 PM 4 comments: 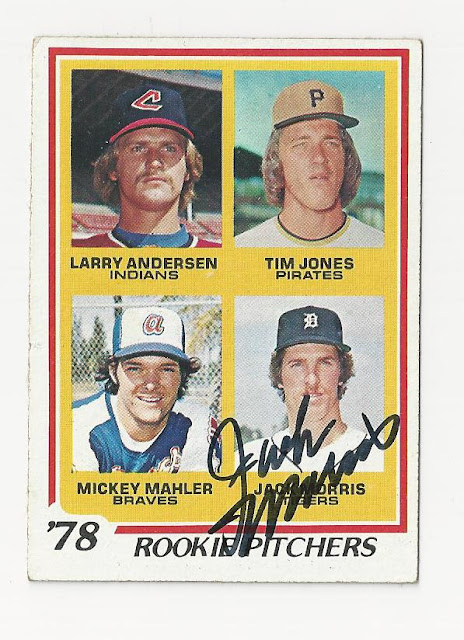 WARNING: This may be the longest blog post I've ever done. Things got crazy today in the ghetto. A few days ago while checking my Crave the Auto app on my phone I saw Jack Morris listed as doing a meet and greet at a Walmart kind of near me. I poked around on the internet like crazy to verify the posting but could find nothing. I needed my '78 Morris RC signed for my goal of completing my Whitaker/Trammell/Parrish/Morris '78 Tiger Rookie Card signatures set that I am hoping to finish this year. I now need Trammell and Parrish and I am done. I had been planning on heading to the West side of the state for a minor league game that he was supposed to be signing at in May. When this popped up I started freaking out over the excitement of getting the card signed and locally at that. I also had my reservations as the ad said nothing about what he was signing and I couldn't verify if it was just a April Fool's prank too. Long story kind of short, I got a bunch of Morris stuff together and decided to commit to going to this event no matter what. When I showed up at the Walmart there was about 40 people in front of me in line. The Walmart employees couldn't answer any questions about what he was signing or how many items or anything. The event was publicized poorly and the information given to the people involved was worse it seemed.
Jack showed up 30 minutes before he was even supposed to and started signing right away. I have heard many negative things about the man and his personality toward anybody, especially autograph seekers but I have to say today my experience was different. He was very pleasant, funny, and tried to entertain everyone. The line moved way too fast and I looped around a number of times and got countless items signed. He was amazing the whole time I cannot and will not listen to negative stories about the guy. He kicked butt today! I had a few short, humorous exchanges with him including some fishing pictures and an April Fool's story about his son that was great. This day totally made up for Tigerfest sucking. (Tigerfest UPDATE: Neither of the 2 guys I got signatures from are on the opening day roster and only one is barely on the 40 man now and the other, though a great guy, is unemployed.) While I was in line I met a guy who told me about a card show about a mile away that I headed to after getting too many signatures. 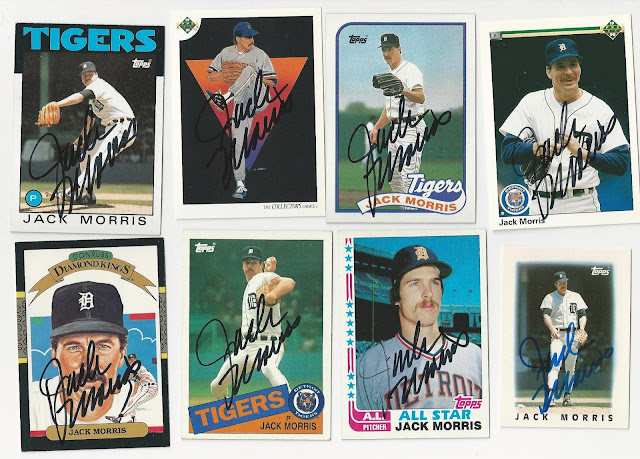 Now, I do feel bad making the guy sign a ton of cards for me BUT I do not sell TTM or in person autos and I have a great uncle, a nephew, a brother, and a son who would totally love to have some Morris ink and the dude got paid and there was no line or people who didn't get anything. So, I think I am alright this time. At the show I was looking for any unique Jack Morris stuff in case I could find something in time to have him sign it. I found another of the '78 rookie cards in better condition than mine for $3. I bought it and went back to Walmart just in time to be the last signature of the day for him. I returned to the card show and overheard a guy frustrated that he didn't know about the signing. I proceeded to trade him the card I had bought for $3 for a handful of Tigers cards. I spent the rest of my day wheeling and dealing and had a great time at the first card show I have been to in years. I will do a separate post on Trade Bait I picked up, the personal collection stuff I found, and what I pulled from a few packs I opened. Here (above) is the rest of my Morris pull minus the other Rookie I traded away. I also got one of the Donruss Jumbo 8X10 free pictures from the event signed. 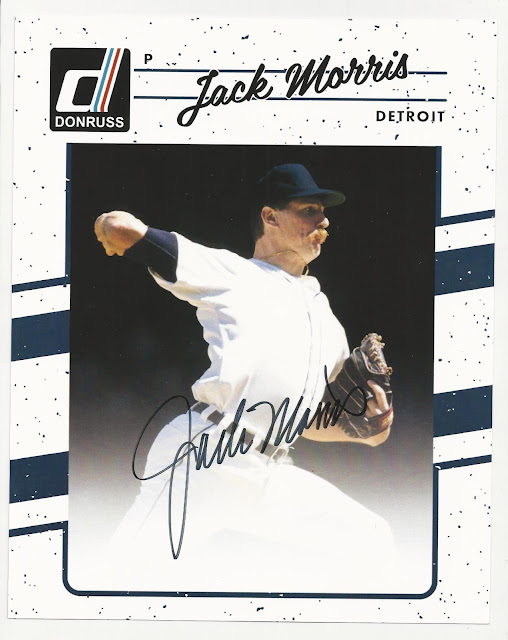