2018 Elite Extra Edition and Catching Up

I am already not posting as much as I would like on here. I am really active on Twitter but everybody on there is getting a bit "Catty" for my taste. Too much drama. So I am backing away from there for a while and hopefully throwing up some more blog posts.

I got thinking about the Stars and Stripes boxes I have found while grocery shopping this year and decided to take a look for one of those tonight. They are a pretty fun rip for $20 because of the great looking cards even though there may be 2 decent guys in the set. I could only find the Elite Extra Edition blaster at Walmart but grabbed it anyway.
The box is kind of silly for one single pack inside. It does boast 2 hits on average on the box though and there are a couple of Tigers prospects I have been chasing in the set. So here goes...


So, all in all about what I expected from the box. One pack for $20 is over pretty quick. I could have had a little more fun with a blaster of Topps Update but I wouldn't have seen any ink, relics or even numbered cards. The auto is a joke to be honest. Google the kid. You can't even find anything about him at all! I tried to find his age but was unsuccessful. If I had to guess he is maybe 14 years old. If anybody has some Tigers prospects they want to trade for some or all of these hit me up.

Its that time of year again when some of us get to spend the pennies we earned spending dollars on ebay and the other half of the collectors out there ask "what the hell are ebay bucks?!" Here are some quick grabs with the $3ish I had to burn.

Are These Guys Going to be Something? 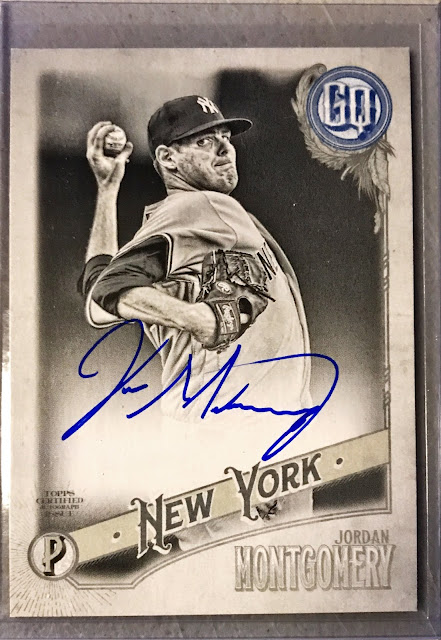 Is Jordan Montgomery going to turn into a big leaguer and eventually a star? This one is for you Lost Collector. The promise was there before the injuries. Some dudes come back from TJ surgery better than before. I just picked up this /50 auto card in a trade on TCDB so I hope he has a good 2019 if he plays this year.

Now how about Victor Robles? My theory is that if Harper is gone this guy gets some serious playing time and hits better than Soto. We shall see. I pulled this card out of a pack from my LCS.

Tigerfest is in a couple weeks. I am getting ready as usual. If there are any newbies going this year; search Tigerfest on this blog to see how I prep and what to expect from years past. They are advertising Miguel Cabrera in attendance again this year. I am dubious but prepared. I have yet to find early entry tickets. It seems nobody has them. BUT there is one account on ebay selling multiples of them for $55 a piece. Are they real? Are the Tigers selling them on ebay instead of giving them out?!  If Miggy is really going to be there I need to find a set.
Posted by Scribbled Ink at 7:17 PM